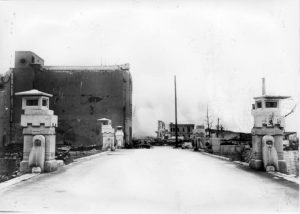 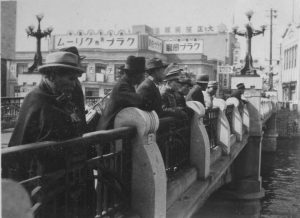 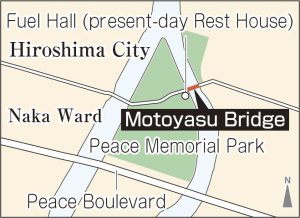 The Motoyasu Bridge links Hiroshima Peace Memorial Park to the west end of the present-day Hondori shopping street, both located in city’s Naka Ward. The bridge is situated a mere 130 meters from the hypocenter of the atomic bombing. Due to the A-bomb blast, the railings on both sides of the bridge were blown into the river and the stone lanterns on the pillars that remained were displaced in different directions. Such characteristics were caused by the bomb blast striking the bridge almost vertically from above and later formed the basis for the assumption that the hypocenter was close to a line extended straight out from the end of the bridge.

At the rear of one photograph is the district of Nakajima-honmachi, which was once one of the city’s busiest downtown areas. While almost all the buildings there burned down, the Fuel Hall, at the left rear of the photo, survived the blast and fires caused by the atomic bombing and was later transformed into what is now known as the Rest House.

The photo was taken by Yoshita Kishimoto, owner of a photo studio in the city center who died in 1989 at the age of 87. He took photos between October and November 1945 as part of a survey of damage caused by the atomic bombing commissioned by Chugoku Hayden (now the Chugoku Electric Power Company). Mr. Kishimoto lost his oldest daughter, who was eight years old at the time, in the atomic bombing, but the work request from the company inspired him to once again pick up his camera. The photo is one of nearly 100 he said that he had captured.

Some of the photos depict the city’s hustle and bustle of the past. A photo taken in 1939 captures members of the public looking down at the river over the bridge railings. Well-dressed men wearing fedoras and some of military bearing also appear in the photo. In the background of the photograph are signboards advertising daily necessities and the Taishoya Kimono Shop, predecessor to the Fuel Hall. All the light fixtures on the bridge had vanished by the time of the photo because they had been provided to the Japanese military for the war effort as a source of metal for munitions.

Due to deterioration from aging, the Motoyasu Bridge was replaced with a new bridge in 1992. No system yet existed for the preservation of A-bombed buildings and structures. “The old bridge was lost given the lack of any particular movement to preserve it,” said Mikio Nakagawa, 63, president of the Hiroshima Fieldwork Committee, a citizens’ group that has recorded testimonies of A-bomb survivors from the former Nakajima district. He added wistfully, “If the original bridge had remained, it would have been the closest A-bombed structure to the hypocenter.”

The Motoyasu Bridge is still a place many citizens and tourists pass along and is sometimes the site of signature-collection campaigns calling for the abolition of nuclear weapons. The A-bombed stone pillars on the bridge still bear faint remnants of days past.