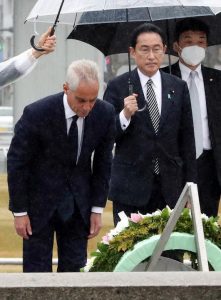 After Mr. Kishida announced the results of the meeting such as an agreement to enhance the U.S.-Japan alliance, he raised the tone of his voice a notch and announced the venue for the summit meeting of the G7 (attended by the Group of Seven industrialized nations), to be hosted by Japan in 2023.

“There is no better place than Hiroshima to show our commitment to peace,” he said. That was the moment he declared Hiroshima to be the site for the G7 summit meeting.

At the end of last year, a competition began among Hiroshima, Fukuoka, and Nagoya to see which of the three cities would be selected to host the summit. The government placed a priority on such factors as capacity of the accommodations available for summit participants and ease of providing security for the event. At one point in time during the selection process, Fukuoka was deemed to be the most promising candidate city. Besides Fukuoka’s favorable transportation access, some believed that nuclear weapon states such as the England and France would show reluctance to hold the summit in Hiroshima.

Then, in late February, Russia invaded Ukraine. Russian President Vladimir Putin hinted at his possible use of nuclear weapons. Fear of nuclear war was brought to the fore. The international community reacted with horror and directed a barrage of criticism against Russia. Needless to say, people from the A-bombed cities of Hiroshima and Nagasaki also voiced their outrage. Around that time, the atmosphere in the prime minister’s office began to change.

Given the situation, administration officials gradually moved toward the idea that the G7 summit should be held in Hiroshima to convey to the world the horror and senselessness of nuclear war.

The justification for holding the summit in Hiroshima had been established in Mr. Kishida’s mind. In late March, he visited Hiroshima Peace Memorial Park, located in the city’s Naka Ward, with Rahm Emanuel, U.S. Ambassador to Japan, shortly after Mr. Emanuel’s arrival in the country.

A tailwind for making the decision on the host city was provided from other figures in Japan and overseas. Pope Francis and European Council President Charles Michel, who both met with Mr. Kishida in May, stressed the significance of Hiroshima as an A-bombed city. Komeito, one of the ruling coalition parties, also called for the summit meeting to be hosted by Hiroshima.

Amid such a situation, the Japanese government privately sought out the opportunity to make the announcement at the time of President Biden’s visit to Japan, although it had officially announced that the summit venue would be determined by this year’s G7 summit, to be held in Germany in late June. In 2016, when then Foreign Minister Kishida endeavored to realize a visit to Hiroshima by then U.S. President Barack Obama, Mr. Biden was serving as U.S. vice president. The two leaders are friendly and call each other by their first names “Joe” and “Fumio.” Mr. Kishida showed extraordinary consideration to Mr. Biden, who carries on Mr. Obama’s aim of a world without nuclear weapons, by personally informing the U.S. president of the choice of Hiroshima to serve as host of the summit.

On a working level, Japan’s intent to host the summit in Hiroshima was communicated to governments of five North Atlantic Treaty Organization (NATO) nations—France, England, Germany, Italy, and Canada—that have worked side by side with the United States to combat the threat presented by Russia.

On one hand, Mr. Kishida has stated that realizing a world without nuclear weapons is his life’s work. On the other hand, however, he has maintained a policy in which Japan continues its reliance on the U.S. nuclear umbrella. That stance has provoked deep-rooted dissatisfaction among A-bomb survivors who want him to stand at the forefront of the effort to abolish nuclear weapons.

On the day of the press conference, with an eye on security threats posed by China and North Korea, Mr. Kishida once again expressed his intent to strengthen expanded deterrence based on Japan’s reliance on U.S. nuclear weapons and conventional military forces.

Amid what seems to be an accelerating nuclear arms race, how will the prime minister ensure that G7 leaders have an opportunity to listen to the voices of A-bomb survivors? At the press conference, when Hirokazu Matsuno, chief cabinet secretary, was asked about the possibility of setting up a meeting between the G7 leaders and A-bomb survivors at the summit meeting in Hiroshima, he simply said, “We’ll now begin looking into that issue.”

Hiroshima was selected to host the G7 summit next year. What was the process behind the decision to hold the summit in the A-bombed city for the first time? In this special feature series, the Chugoku Shimbun will focus on expectations held by A-bomb survivors for the summit and the importance of inviting leaders to Hiroshima from G7 nations including the nuclear powers the United States, England, and France.