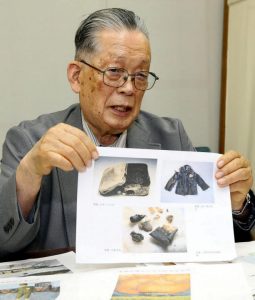 Desire for leaders to “listen directly” to accounts of A-bombing devastation and imagine A-bombing experience as if their own
by Junji Akechi and Kana Kobayashi, Staff Writers

Hearing the news that the summit meeting of the G7 (attended by the Group of Seven industrialized nations) will be held in Hiroshima, Sadao Yamamoto, 90, an A-bomb survivor living in the city’s Higashi Ward said, “This is an opportunity to have leaders of developed nations understand the reality of the devastation caused by the atomic bombing.” As the risk of nuclear weapons’ use has increased with Russia’s invasion of Ukraine, Mr. Yamamoto hopes that the leaders of the nuclear weapons states the United States, England, and France will “learn how many people can die from nuclear weapons.”

When the G7 Foreign Ministers’ Meeting was held in Hiroshima in April 2016, Mr. Yamamoto prepared to share his experience in the atomic bombing with media from Japan and overseas. Few reporters came to listen to his account, with no overseas media representatives present. The foreign ministers who visited Hiroshima did not have the opportunity to listen to any of the testimonies of A-bombing experiences. The meeting ended up being a frustrating experience for those who had hoped to share their accounts of the atomic bombing.

Mr. Yamamoto communicates to the public how he experienced the atomic bombing when a second-year student at Hiroshima Second Middle School (now Kanon High School). He was at the East Drill Ground, located in Hiroshima’s Higashi Ward to the north of the Hiroshima train station, and suffered burns in the bombing. The deaths of younger students at the same school are what motivated him to share his experience.

At that time, first- and second-year students at the school were mobilized in a daily rotation to help tear down houses in the center of the city to create fire lanes. August 6, 1945, happened to be the workday for the first-year students. They gathered on the bank of the Honkawa River, which runs along the west side of present-day Hiroshima Peace Memorial Park. All of the students were killed. A memorial monument dedicated to the victims from the school now stands on the river bank. The names of 354 students and staff, of which 323 are the names of the first-year students, are inscribed on the monument.

Mr. Yamamoto recalls, “I had only a vague understanding of what actually had happened to each of the first-year students.” But his awareness changed dramatically in 1969 when he saw a television report about the first-year students of the school. One student was badly burned but managed to reach home. Another died while searching for his parents. Mr. Yamamoto realized that the students suffered an indescribable tragedy at the end of their lives.

At the Hiroshima Peace Memorial Museum, located in Naka Ward, are displayed burned clothes and many other personal belongings of school students, including those of the students at the Second Middle School. “Looking at those personal effects and you can imagine how those children who died in agony could have been you,” said Mr. Yamamoto. He hopes that leaders of the G7 countries will have an opportunity to listen directly to the A-bomb survivors, but it is not clear whether they will have time to do so. Chief Cabinet Secretary Hirokazu Matsuno, at a press conference held on May 23, said only that, “We’ll now begin looking into that issue.”

One month after the Foreign Ministers’ Meeting, in May 2016, Barack Obama became the first sitting president of the United States to visit Hiroshima. The U.S. president did not listen to A-bomb accounts of survivors, and his visit to the Peace Memorial Museum lasted only 10 minutes. Shigeaki Mori, 85, an A-bomb survivor living in Hiroshima’s Nishi Ward whose embrace with Mr. Obama in Peace Memorial Park attracted considerable attention, hopes that G7 leaders will carefully confront the reality of the devastation caused by the atomic bombing.

Mr. Mori believes that holding the summit in Hiroshima has more significance than just as an opportunity for leaders to learn about the devastation from the atomic bombing. Mr. Mori has long looked into what happened to U.S. prisoners of war who were killed in the atomic bombing, although the two sides were enemies in the war. He has also had many discussions with the POW victims’ families who suffered from lack of knowledge about what happened to their family members during their final days, communication that Mr. Mori continues to this day. “It’s important to think of them not as enemies but as human beings. The embrace with Mr. Obama was an extension of that,” he said.

Mr. Mori believes that the role of the G7 Hiroshima Summit will be to “help each other, not kill each other. Stop war and eliminate nuclear weapons. I hope the leaders have successful talks for the realization of peace.”