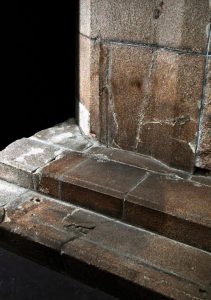 The intense heat from the atomic bombing turned the surface of the stone steps white, but the part where someone seemed to have been sitting remained dark. A later survey of the site found that the shadow contained organic matter. For that reason, a person is believed to have been sitting on the stairs waiting for the bank to open and killed on the spot without having had any chance at escape. That description is why the shadow area is sometimes known as the ‘human shadow of death.’

Upon detonation of the atomic bomb, the temperatures on the ground around the hypocenter reached between 3,000 and 4,000 degrees Celsius. According to The Record of the Hiroshima A-bomb Disaster, the interior of the bank building was completely destroyed by the intense thermal rays and blast from the bombing, which spared only the reinforced steel exterior walls. Many employees preparing for the opening of the bank in the building or on their way to work were believed to have been killed.

The steps were removed from the original site and donated to the museum in 1971, when the bank’s branch building underwent renovation. On permanent display at the museum, the steps communicate to visitors the ‘voice’ of the victim who was killed at that time without having had a chance to say anything.

Sho Kutsuki, a writer of children’s literature from Hiroshima, used the stone steps as a motif for her short story “The Memory of Stone,” which is included in the publication Light of August, Listening to Lost Voices. The short story depicts how the modest lives of a mother and daughter in Hiroshima were ended in a flash by the single atomic bomb.

In that way, the stone has been used as a theme in various forms of expression such as literature, paintings, and comic books, conveying to people in Japan and overseas the devastation wrought by the atomic bombing. That is possible because the stone steps cause viewers to contemplate the possibility that someone was probably there.

Numerous individuals have contacted the museum with the proposition that the shadow might have been that of a family member. But those involved have not been able to confirm the identity of the person whose shadow was imprinted onto the stone steps.

The shadow on the stone steps clearly shows the inhumanity of nuclear weapons. The “Human Shadow Etched in Stone” part of the museum’s exhibit persists in emphasizing the “absence” of a human being that was caused by the atomic bombing.