Special Feature: On decision to select Hiroshima as host of G7 summit, Part 3—Significance of welcoming G7 leaders to city 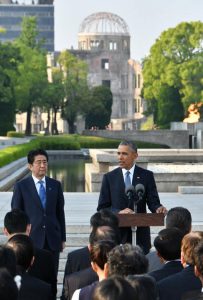 On May 23, the day the decision was made by the Japan national government to hold the summit meeting of the G7 (attended by the Group of Seven industrialized nations) in the A-bombed city for the first time, Hiroshima City Mayor Kazumi Matsui did not hide his elation at a press conference. “It is of great significance that the leaders of major nations of the world, including the nuclear weapons states, will visit Hiroshima to engage in discussions. My hope is that they communicate their unshaken resolve toward a diplomatic framework that transcends nuclear deterrence,” said Mr. Matsui.

Promoting the summit under the slogan “Welcoming Peace,” the city will call on leaders in Japan and overseas to visit Hiroshima at that same time. The campaign’s goal is to enable guests to the city to not only to understand the reality of the devastation wrought by the atomic bombing through such activities as tours of the Hiroshima Peace Memorial Museum, located in the city’s Naka Ward, but also to make the experience impetus for changes in policy toward achieving the elimination of nuclear weapons.

Major obstacles stand in way of nuclear disarmament Will a visit by political leaders to the A-bombed city, however, truly lead to concrete strides toward the goal of nuclear disarmament? Given how history has played out to this point and the current international situation, the path to achieving that goal must overcome nearly insurmountable obstacles.

In April 2016, foreign ministers of the G7 and European Union (EU) nations paid a visit to Hiroshima Peace Memorial Park, located in the city’s Naka Ward. One month later, Barack Obama, then president of the United States and a recipient of the Nobel Peace Prize in 2009 for his speech in Prague, the Czech Republic, in which he endorsed a world without nuclear weapons, spoke and shared a hug with A-bomb survivors in front of the Cenotaph of the A-bomb Victims in Peace Memorial Park. With that, Hiroshima attracted worldwide attention, resulting in a sharp increase in overseas tourists visiting the museum.

Meanwhile, the visit by Mr. Obama, who had little time remaining until the end of his term as president, was criticized as an act with an eye on his political legacy. Thereafter, the United States continued to invest enormous sums in modernizing its nuclear arsenal. Under the next administration, led by President Donald Trump, a policy of development and deployment of smaller nuclear weapons was advanced. England raised the upper limit of its nuclear warheads in order to defend itself against Russia and China. Each nation’s nuclear policy has, conversely, led to what can be seen a military buildup.

“If leaders would just visit Hiroshima and that would be the end of it, the summit in the city would be meaningless,” said Hiroshi Harada, 82, former director of the museum and an A-bomb survivor living in the city’s Asaminami Ward. With frustration, he believes Hiroshima has the power to change the hearts and minds of political leaders, based on his experience of guiding key public figures through the museum when he served as its director. He exclaimed, “It will be the first and only chance for Hiroshima to enjoy so many leaders in the city all at once. The government and citizens must collaborate to think about an effective way of influencing such individuals in order to produce results for the sake of nuclear disarmament.”

In the background behind Japan’s decision to hold the summit in Hiroshima City was a sense of crisis about Russia’s suggestion that it might use nuclear weapons, following its military invasion of Ukraine earlier this year in February. According to a government official, no difference existed among Fukuoka, Nagoya, and Hiroshima, the candidate cities vying to host the summit, in terms of issues of security and accommodations. But Japan’s Prime Minister Fumio Kishida (representing Hiroshima Prefecture’s District No. 1), determined that Hiroshima would the ideal venue for discussing the issue of nuclear disarmament. After Mr. Kishida made up his mind about the venue, government staff spent nearly two weeks to obtain agreement from all the G7 nations.

Humanitarian issues key to everything

Mari Katayanagi, professor at the graduate school of Hiroshima University and a specialist in peacebuilding, said, “How Japan’s national government acts over the next 12 months until the summit will determine whether or not it can deliver results.” Ms. Katayanagi has called on the government to play an active role in urging a ceasefire, among other measures, with respect to Russia’s invasion of Ukraine. “I want the Japanese government to take advantage of the summit being held in Hiroshima to launch its own brand of diplomacy that puts humanitarian issues first. If the government can demonstrate humanitarianism in its actions, Japan will receive empathy from around the world with regard to Hiroshima’s petition for the elimination of nuclear weapons,” said Mr. Katayanagi.