Directors and chairperson of WFC, base of international peace exchange, replaced and they pledge to send message of peace 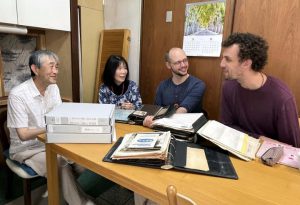 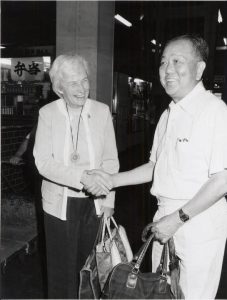 The American directors of the World Friendship Center (WFC), located in Hiroshima’s Nishi Ward, a hub of international peace exchange established by the late Barbara Reynolds (1915-1990), a peace activist from the United States, and chairperson of the non-profit organization (NPO) that operates it have been replaced. While the new coronavirus pandemic continues to make it difficult to receive visitors, they pledge to send a message of peace, making a fresh start.

The 42nd directors are Matthew Bateman, 31, from Seattle, and Malachi Nelson, 27, from Oregon. In cooperation with the A-bomb survivors, Japanese staff, and volunteers who gather here, they will be responsible for responding to users who receive peace training while staying at the WFC, and teaching English classes to convey the message of peace.

Successive directors have been dispatched as volunteers for a two-year term by a cooperating organization in the U.S. Many of them are married couples of the retired generation, but the coronavirus pandemic made it difficult to select people. JoAnn Sims, who was co-director ten years ago, approached Mr. Bateman, a student of hers during her time as a teacher, and Mr. Nelson, an acquaintance through church activities, respectively, and the young male duo was formed. In March, when the Japanese government relaxed immigration restrictions, they replaced their predecessors, Mr. and Mrs. Edmark.

Mr. Bateman visited the WFC when Ms. Sims was the co-director. He listened to an account of the atomic bombing from an A-bomb survivor and learned that the story does not end with the war on the whole, but touches each person’s experience individually. He said he had wanted to be co-director someday. With high motivation, Mr. Nelson also said that he wanted to deliver the power of A-bomb survivors’ accounts.

The chairperson was changed for the first time in ten years, and the job was handed over from Michiko Yamane, 75, a resident of Minami Ward, to Shizuo Tachibana, 66, a resident of Saeki Ward. Ms. Yamane, who has translated accounts of A-bomb survivors and continues visiting nursing homes for A-bomb survivors, said, “I was supported by the pacifism and the spirit of service of the directors. I carry on Barbara’s beliefs, ‘When people have a chance to meet and talk with each other, there starts a mutual understanding which will lead to friendship, and that friendship can prevent war.’”

Mr. Tachibana is the fourth chairperson after the late Tomin Harada, a doctor who served for about 20 years while devoting himself to treating the A-bomb survivors, Hiroshi Morishita, 91, a resident of Saeki Ward who served as chairperson for 26 years, and Ms. Yamane. The WFC building has been relocated three times, and the facility in Higashikanon-machi has been the base since 1996.

It is not easy to operate the WFC. It received 1,018 people from the world in fiscal 2019, but almost none in fiscal 2020 and 2021 due to the coronavirus pandemic. The A-bomb survivors who lead the efforts to convey their A-bomb experiences are becoming old, and Emiko Okada passed away at the age of 84 last year.

Peace Ambassadors Exchange (PAX), a program in which Japanese members have a mutual homestay with U.S. and Korean citizens, and other services have also been switched online. Still, Mr. Tachibana said, “I want to value the opportunity to build a bridge to convey the thoughts of the A-bomb survivors. I also will work to preserve and pass on our records of our activity.”

In 1951, at the end of the occupation, Ms. Reynolds set foot in Hiroshima with her husband, Earle, who was assigned to the Atomic Bomb Casualty Commission (ABCC, now Radiation Effects Research Foundation located in Minami Ward). She was shocked to learn about the devastation of the atomic bombing.

A further turning point was in 1958. During her family’s around-the-world trip on a yacht, she decided to protest the U.S. hydrogen bomb test and rushed into the no-entry zone of the Marshall Islands. She also attempted to sail to Nakhodka in 1961 to protest Russian nuclear testing.

In 1962, trying to let nuclear weapon states know the reality of the atomic bombing, she visited various countries such as the U.S. on the World Peace Pilgrimage, accompanying the late Miyoko Matsubara, an A-bomb survivor, and an A-bomb orphan, and in 1964, she led about 40 people to Europe and other areas. In 1965, she established the WFC with her close friend, Dr. Harada. After returning to the U.S. in 1969, she continued her activities. She was bestowed the title of Honorary Citizen of Hiroshima from the Hiroshima municipal government.

As a Quaker, she remained poor but honest and lived an anti-nuclear life, taking the sufferings of the A-bomb survivors as her own. Now that Russia has threatened with the use of nuclear weapons over its invasion of Ukraine, Mr. Morishita wonders, “What would Barbara do?” The monument near the Hiroshima Peace Memorial Museum, located in Naka Ward, is inscribed with the words of her lifetime, “I, too, am a hibakusha.”