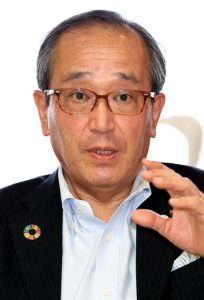 —Hiroshima’s efforts to invite the summit have borne fruit, with the decision to hold the meeting of the G7 (attended by the Group of Seven industrialized nations) for the first time in the A-bombed city next year.
Leaders charged with making determinations about their own national security policy will gather in the A-bombed city for the summit and witness a metropolis that has achieved complete recovery since the bombing. Hiroshima has argued that true peace cannot be reached unless nuclear weapons are eliminated. The G7 summit represents a good opportunity for the leaders of those countries to be fully and directly cognizant of our message and discuss a security framework free from reliance on the absolute evil that are nuclear weapons. To make the summit successful, we hope to strengthen collaboration with the Hiroshima Prefectural government and the local business community.


Path toward nuclear abolition unclear
–Against the backdrop of the situation in Ukraine, global nuclear disarmament is in a critical state. With that in mind, what kinds of deliberations do you feel are necessary during the summit?
I do not want the participants to solely focus on topics such as economic sanctions against Russia and its response. I hope the leaders can discuss a security framework for realizing a world without nuclear weapons and reveal a tangible way to achieve that end.

Japan’s national government has repeated its insistence that first and foremost nuclear disarmament and nuclear non-proliferation efforts should proceed realistically. However, there has been no clear approach provided by the government for achieving the abolition of nuclear weapons, the ultimate objective, even as the government itself has established abolition as a goal.

–Why do you think the approach is unclear at this point?
Currently, the issues of winning or losing the war and temporary problem-solving strategies are being given higher priority. Russia’s invasion of Ukraine is a pragmatic act based on certain political leaders’ values and historical views and the idea that civilian casualties in the neighboring nation are unavoidable. On the other hand, while some nations explicitly condemn Russia others do not. It is a reality in our world that the responses to such inhumane acts differ by nation, depending on security and trade implications.

People in Hiroshima have forcefully communicated the message that all nations should stop threatening the use of nuclear weapons regardless of their position. If nuclear weapons were to be used again, it would lead to the extremely inhumane result experienced by Hiroshima in the past. So long as nuclear weapons exist, that risk will not disappear. Having the G7 leaders fully understand that fact is crucially important.


Forum for dialogue with A-bomb survivors needed
–Do you think the visit to Hiroshima will alter G7 leaders’ perceptions?
We at the Hiroshima City government have worked on the summit effort under the slogan “Welcoming Peace” and called on leaders in Japan and overseas to visit Hiroshima. We will request Japan’s national government to create opportunities for the G7 leaders to visit the Hiroshima Peace Memorial Museum and engage in dialogue with A-bomb survivors during the course of the summit meeting. Everyone who learns about the reality of the atomic bombing in Hiroshima firsthand comes away affected. If leaders are truly aware of the outcomes from the use of nuclear weapons, they might begin to notice the fundamental mistakes inherent in short-sighted disputes and policies. I believe Hiroshima has the power to make this possible.

–What impact do you think the summit will have on civil society in Hiroshima?
If the discussions achieved in the A-bombed city are communicated broadly, the summit will be an opportunity to foster a greater awareness of peace. At that point, civic activities would be further invigorated if meaningful debates were to be carried out at the summit and if the public could sense that their political leaders were willing to accept the wishes of citizens seeking peace and the elimination of nuclear weapons. I hope the summit delivers an outcome that can empower initiatives at the civic level.


Profile
Kazumi Matsui
Elected as Hiroshima City mayor for the first time in 2011, after having served posts at Japan’s Ministry of Health, Labour and Welfare, including as director-general for International Affairs in the Minister’s Secretariat. Mr. Matsui is in his third term of office as mayor while also serving as president of Mayors for Peace, an organization consisting of about 8,200 member cities worldwide that aims at elimination of nuclear weapons and creation of lasting peace. He is originally from Hiroshima’s Higashi Ward and graduated from the law school at Kyoto University. He is 69 years of age.