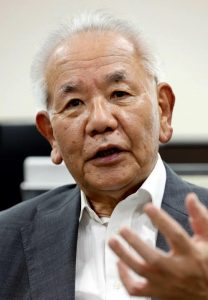 –You are panel chair of a body that calls for construction of large-scale facilities for meetings, incentives, conferences, and exhibitions (MICE) and looks into development of the areas surrounding such venues. Do you think Hiroshima’s hosting of the summit meeting of the G7 (attended by the Group of Seven industrialized nations) will add impetus to your group’s efforts?
I have great expectations. Visual imagery of the summit will be broadcast throughout the world, bringing attention to Hiroshima. Academic conferences and exhibitions are typically held in well-known venues. We firmly believe that a suitable environment needs to be established in Hiroshima to meet any demand for use of Hiroshima as a stage for events on that scale.


No MICE facility currently available in Hiroshima
–You have requested that the city construct MICE facilities with a capacity of at least 5,000 people.
Hiroshima lacks such facilities today. I served as secretary general of the working committee for the National Confectionery Expo Hiroshima, held in the city in 2013, setting up large tents for the exposition at the site of the former Hiroshima Municipal Baseball Stadium, in Hiroshima’s Naka Ward. After that event, another organization contacted us and asked if it was possible for them to hold a major exhibition of medical and other devices using such tents. That exhibition proved impossible due to costs and other issues, but I truly felt that Hiroshima lacked appropriate facilities.

–During the summit, an international media center, which will serve as a reporting and editing hub for Japanese and overseas media, is assumed to be located in the Hiroshima Prefectural Sports Center (Green Arena) and the International Conference Center Hiroshima, both located in the city’s Naka Ward.
Fukuoka and Nagoya, the other cities that had declared their aim to host the G7 summit in 2023, likely had the capacity to locate the media center in one place given the expansiveness of their facilities. In terms of availability of MICE facilities, Hiroshima lags way behind those cities, making it impossible for us to catch up with them in the short term.

In terms of holding large academic conferences, I understand the ideal break time between sessions to be about 15 minutes. Venues limited in size and dispersed around various locations tend to be avoided because participants have a hard time traveling and, as a result, the break times between sessions have to be longer. Larger facilities enjoy an advantage in that regard.


Attention will fall on local products made in Hiroshima Prefecture
–Do you think hosting the summit will enhance the attractiveness of Hiroshima?
Products made in Hiroshima Prefecture, such as local cuisines and gifts provided to the leaders at the summit, will draw attention. In May, when Japan Prime Minister Fumio Kishida (representing Hiroshima Prefecture’s District No. 1) had a working lunch with U.S. President Joe Biden in Tokyo, Hiroshima Lemon Cider (made from lemons grown in Hiroshima) was used for the toast. That beverage was said to have been sold out at some shops after the summit. Similarly, a new, local staple has the potential to be born in Hiroshima after the G7 summit. If our capacity to entertain visitors can be improved by enhancing the attractiveness of our city through the summit, that could lead to the holding of other international conferences.

–What types of other ripple effects do you expect from the summit?
I would be happy if hosting the summit could generate not only direct and temporary economic effects, such as from business related to lodging and meals offered to people involved in the summit, but also a natural sense of confidence and pride in our local community. We want to accelerate momentum for improvement of our local transportation infrastructure and scenery through initiatives by the public and private sectors to enable us to welcome even more people from the around the world. I hope the summit will create a virtuous cycle in which key global figures, state-of-the-art technologies, and fresh ideas assemble in the city and provide inspiration to young people.


Profile
Gakuhito Ito
Graduated from the school of economics at Keio University. Joined Ito Sato (now Ito Corporation) in 1977 and served as president from 1990 to 2020. Now serves as the company’s chairperson. Mr. Ito has also held such positions as chair of the Hiroshima Prefectural Federation of Small Business Associations and director of the wholesale cooperative Hiroshima Oroshi Center. Since 2019, he has held the post of panel chair for the MICE subcommittee of the review panel for revitalization of the commercial and industry center district in Hiroshima City. Originally from Hiroshima’s Nishi Ward, he is currently 72 years of age.