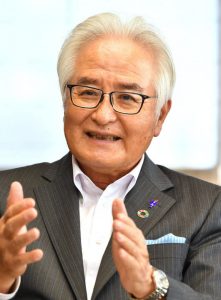 Amid the persistent coronavirus pandemic, Hiroshima has been selected to serve as host of the summit meeting of the G7 (attended by the Group of Seven industrialized nations). What ripple effects do you think the summit will have on the local economy?
The summit will attract worldwide attention, with overseas media coming to Hiroshima even before the summit begins. As for cuisine, Hiroshima boasts food from both land and sea as well as local Japanese sake. The summit represents a great opportunity to introduce Hiroshima’s industries and culture to the world. The summit is expected to contribute greatly to attracting visitors from Japan and overseas.


Effects on tourism
In addition to the direct economic effects during the course of the summit, the ripple effects after the summit could also be significant. People in the tourism and restaurant industries, which were hard hit by the coronavirus pandemic, have high expectations for the summit. The numbers of overseas visitors visiting Japan will likely increase on the back of the weak yen. Hiroshima will become one of the popular tourist destinations in Japan selected by tourists.

How do you think the summit should be used as an opportunity to promote the development of Hiroshima?
I hope that both the public and private sectors can cooperate to expand the fifth-generation (5G) mobile communications network. Expanding the 5G network, including in the areas around the Hiroshima Prefectural Sports Center (also known as the Green Arena), which is to be positioned as an international media center, and the International Conference Center Hiroshima, both of which are located in the city’s Naka Ward, will contribute to the development of Hiroshima even after the summit concludes. Because the network can be used for medical and educational purposes in mountainous and remote island areas, it will improve the quality of life for the residents of Hiroshima Prefecture. The network can also be used to attract start-up companies and improve the productivity of local businesses. It will become an integral part of infrastructure. I hope Hiroshima can become a pioneer among regional cities in this regard.


Collaboration between public and private sectors desired
How will the business community be involved in preparations for the event?
We need to make sure we are ready to welcome people in all facets, including having signs in the city with information in other languages. The Hiroshima Chamber of Commerce and Industry will send its people to Mie Prefecture, which hosted the 2016 Ise-Shima Summit, to gather information on challenges they encountered in holding the summit at that time.

Many related workers such as those involved in security will also come to Hiroshima. We need to work on how to secure accommodations for those workers as well as parking spaces for security vehicles. The business community and the private sector should be able to cooperate in providing such space. The Hiroshima Prefectural and City governments and the local business community will work together to ensure the summit is a success.

What do you want the leaders of the G7 nations to see?
That without economic development there can be no lasting peace. I want them to see how Hiroshima has recovered from the atomic bombing. If they have a chance, I hope they can visit a Mazda factory and the company’s museum to grasp a sense of the automotive business, one of Hiroshima’s major industries. Because of the Ukraine crisis, the prices of resources and food are soaring, which has had a profound impact not only on industry but also people’s everyday lives. I hope that the G7 summit in Hiroshima will not only be successful but also serve as the impetus toward a return to normal economic activity. (Interviewed by Kazuaki Yamamoto)


Profile
Koji Ikeda
Graduated from the business school at Keio University. Joined Hiroshima Bank in 1977. He took over the post of bank president in 2012 and chairman in 2018 after serving in such positions as executive director and general manager of the bank’s Fukuyama Sales Division, as well as managing director and general manager of the Management Planning Division. He became chairman of the Hiroshima Chamber of Commerce and Industry in November 2019. Originally from Mihara City in Hiroshima Prefecture, he is currently 68 years of age.