Japanese professor from Hiroshima tries to spread peace education in the U.S. by creating curriculum focusing on the A-bombings and nuclear issues 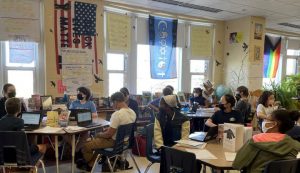 Yuki Miyamoto, a second-generation A-bomb survivor from Hiroshima and professor at DePaul University in Chicago, the United States, has created a curriculum for a local public school focusing on the atomic bombings and nuclear issues, and conducted a class based on it. Professor Miyamoto says, “The human toll caused by the atomic bombings as well as the Treaty on the Prohibition of Nuclear Weapons are not well known in the U.S. I would like to raise the interest of the people regarding these things.”

In late May, two sixth-grade classes at National Teachers Academy (NTA), where students up to the eighth grade - the second year in Japanese junior high school - learn, had a 90-minute class every day for two weeks. The students sat around a desk on which Barefoot Gen, a manga series that depicts the atomic bombing of Hiroshima and its aftermath, and Hiroshima, John Hersey’s masterpiece which documented the six survivors’ testimonies the year after the bombing, were displayed, and discussed such themes as “whether atomic bombings were inevitable” and “whether nuclear power plants should be kept running.”

Teachers urged the students to show a basis for their arguments. They spoke: According to the remarks made by President Truman…: Most studies suggest that Japan would have surrendered before too long: The damage caused by the atomic bombings is morally indefensible. Students tried to find common ground, and finally agreed that the atomic bombs should not have been dropped. They also learned about the life of Sadako Sasaki, and folded paper cranes in the class.

The idea of offering the class occurred to Dr. Miyamoto in 2019, when her friend, Aiko Kojima Hibino, lecturer at the School of the Art Institute of Chicago, told her “a large volume of Hiroshima books were removed from public school libraries and discarded in a dumpster.” She was concerned Americans might become less interested in the atomic bombings.

Hoping to provide children learning opportunities, she started the Paper Crane Project, making a plan for the class with the help of two teachers at NTA, Ms. Jessica Kibblewhite and Ms. Laura Gluckman, where Ms. Kojima Hibino’s son attended. They established a classroom library with a Hiroshima Peace Grant from the Hiroshima Peace Creation Fund. The project received a tailwind from the Teaching Equitable Asian American Community History (TEAACH) Act, an Illinois state law passed last year that requires public elementary schools and high schools to teach history of Asian Americans as well as their contributions toward advancing civil rights.

“Peace education” at a public school in the country that dropped the atomic bombs has many different aspects compared with those conducted in the A-bombed cities.

NTA was on the list of schools to be closed by the large-scale school closure plan hammered out by Rahm Emanuel, the current U.S. Ambassador to Japan, when he was Mayor of Chicago. The plan was actually to close the NTA, which consists mostly of nonwhite students, and transform it into a high school for children of white wealthy-class families. Ms. Kojima, who serves on the board of the parents’ association, led a campaign with others against the school closure, and revoked their decision by winning the suit.

Students in the class asked whether the United States could use an atomic bomb against Germany, and indicated that nuclear weapons are maintained along racist structures, considering the radiation effects on Native Americans who mine the uranium. “They have a strong consciousness of trying to see the atomic bombings as an example of discrimination and as a matter of justice,” Professor Miyamoto points out.

Asian students, who study side by side, also have an opportunity to learn the history of Japan’s militarism and colonial rule through the class carried out in accordance with the TEAACH Act. The paper crane project aims to provide the curriculum to other grades and schools after next year.