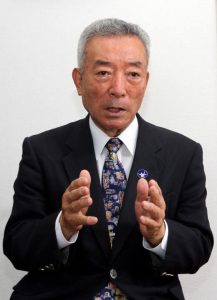 Frustration at national government’s turning away from TPNW
Feelings of A-bomb survivors should be taken into account
by Kana Kobayashi and Tsuyoshi Kubota, Staff Writers

I experienced the atomic bombing when I was three years old and playing on the ground in front of the entrance to my house in the area of Ushita-cho (now part of Hiroshima’s Higashi Ward). At home at that moment were four members of my family — myself, my parents, and my younger sister. My father, sister, and I avoided major injury, but my mother’s entire body was pierced with shards of broken glass blown by the A-bomb’s blast. She looked like a hedgehog.

My mother must have been traumatized by the atomic bombing. All the way up to her death at the age of 93, she never spoke of her experience in the bombing. “I don’t want to remember,” she explained. Because I was still very young and did not have many memories of that time, I have traced what happened that day based on my father’s recounting of the event.

Meanwhile, 24 years after the atomic bombing, my father died of maxilla carcinoma (cancer of the upper jaw) at the relatively young age of 59. I have to think his early death was attributable to the radiation generated in the bombing. For myself, my body is akin to a supermarket of disease — parathyroid tumors, thyroid cancer, and a host of other ailments.

In accordance with the First Meeting of State Parties to the Treaty on the Prohibition of Nuclear Weapons (TPNW), scheduled to begin on June 21, Mr. Ieshima is to be sent by the Japan Confederation of A- and H-bomb Sufferers Organizations (Nihon Hidankyo) to Vienna, Austria, the venue of the meeting. Nuclear weapons kill many people and cause mental and physical distress in survivors over many years. As such inhumane weapons and humans cannot coexist on earth, our only option is to abolish the weapons. I want to stress this point at the meeting to make sure people around the world are aware of this reality.

Despite my age, I am still young compared with the rest of the elderly survivors. I want to respond to the feelings of my elders, as it were, who have continued to drive their aging bodies to carry out work in A-bomb survivors’ campaigns. I cannot keep silent because we have to make sure a world with nuclear weapons will not be passed on to following generations.

The A-bombed nation of Japan has not ratified the TPNW and turned down the idea of attending the states parties meeting as an observer.

Despite Japan’s experience in the atomic bombings, the national government’s turning away from the treaty is exceedingly frustrating for me as an A-bomb survivor. When the TPNW was established, I thought our efforts over such a long period had finally paid off, with good possibilities for the future. Despite our feelings, the government has placed a priority on diplomatic relations with the United States and other factors, failing to meet the expectations of A-bomb survivors and the international community.

Germany and Norway, members of the North Atlantic Treaty Organization (NATO), which is basically a nuclear alliance of western nations, will attend the TPNW states parties meeting as observers. The A-bombed Japan should also attend. Japan needs to listen to the opinions of not only nuclear weapons states but also non-nuclear weapons states if it hopes serve as a liaison between the two sides, a role it has publically vowed to play.

In May, Nihon Hidankyo submitted to Japan’s Ministry of Foreign Affairs more than 900,000 signatures calling on Japan Prime Minister Fumio Kishida (representing Hiroshima Prefecture’s District No. 1) to sign and ratify the TPNW. The organization once again urged the government to attend the states parties meeting as an observer.

Those signatures represent a collection of the wishes of many people, including A-bomb survivors. We worked hard to gather signatures by being involved in street campaigns, during which elderly survivors in less than robust health had to stand for an hour. Mr. Kishida constantly speaks of his home being Hiroshima. If so, I want him to take our feelings and actions into account more seriously. Not much time remains for A-bomb survivors. My hope is that this prime minister, representing the A-bombed city, will take a different approach forward from that taken by past leaders.

Anger and disappointment expressed about Japan not joining TPNW

A-bomb survivors had desperately hoped for establishment of the TPNW, which comprehensively bans the development, testing, possession, and use of nuclear weapons, as well as any threat of their use.

A-bomb survivors have testified about the reality of the atomic bombings at a negotiation meeting for the treaty, held at the United Nations headquarters in New York City in 2017, and other meetings in Japan and overseas. They have devoted themselves to spreading the idea at a societal level that nuclear weapons are inhumane. In response to that effort, TPNW’s preamble mentions that the states parties to the treaty have to be “mindful of the unacceptable suffering of and harm caused to the victims of the use of nuclear weapons (hibakusha).”

The treaty entered into force in January 2021. Believing that the treaty would be a turning point toward elimination of nuclear weapons, A-bomb survivors were pleased. On the other hand, there was widespread disappointment and anger among survivors because the government of Japan, which is reliant on the U.S. nuclear umbrella, persisted in its stance marked by an unwillingness to join the TPNW.

With TPNW’s entry into force, Nihon Hidankyo has collected signatures nationwide calling for signing and ratifying the TPNW, submitting 901,554 signatures to Japan’s Ministry of Foreign Affairs earlier in May this year. The organization also worked with affiliated organizations on the Hibakusha Appeal, a signature drive calling on countries throughout the world to join the TPNW, leading to 13,702,345 signatures being submitted to the United Nations in January 2021. Nihon Hidankyo will send its Secretary-General Sueichi Kido, 82, and Representative Director Masashi Ieshima to the First Meeting of States Parties to the TPNW, to be held in Austria.