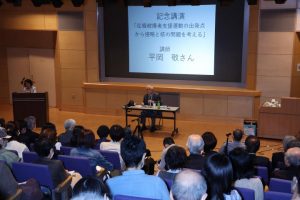 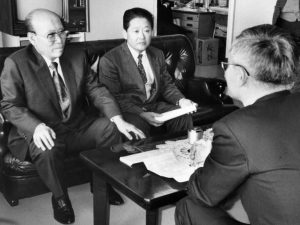 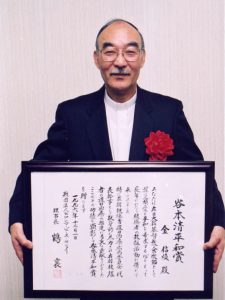 The Citizens’ Association for the Relief of A-bomb Victims in South Korea recently marked the 50th anniversary of its founding. For half a century, the Association has continued its support of South Koreans who had experienced the A-bombing in Hiroshima or Nagasaki but were not eligible for public support because they did not live in Japan. At a recent a commemorative gathering held in Hiroshima City, the association considered issues that persist in its work.


“Confronting history of Japanese colonial rule”
South Korean victims of the atomic bombings had been excluded from relief measures for A-bomb survivors provided by Japan’s national government for many years, despite the fact that such survivors, as a direct result of Japanese colonial rule of Korea, had been forced to come to Japan for compulsory military service, as conscripted labor, or because of extreme poverty.

The citizens’ association was formed in Osaka in December 1971, when Shin Yong-su, of the South Korean Atomic Bomb Sufferers Association who died in 1999 at the age of 80, came to Japan to voice his dissatisfaction about the dire circumstances faced by such individuals. In 1970, the year before Mr. Shin’s visit, Son Jin doo, who experienced the atomic bombing in Hiroshima and died in 2014 at the age of 87, had been detained by Japanese authorities for illegally entering Japan to undergo medical treatment. At that time, citizens of Japan initiated activities to ensure that Mr. Son could obtain the medical treatment he needed.

The citizens’ association helped South Korean A-bomb survivors who had come to Japan with administrative paperwork for obtaining Atomic Bomb Survivor’s Certificates and communicated with medical organizations to ensure medical treatment was available to them. The association also fully supported A-bomb survivors living abroad who took their cases to court, including Kwak Kwi Hoon, who filed a lawsuit in 1998 seeking compensation of the health management allowance provided under the Atomic Bomb Survivors Relief Law. For a long time, South Korean A-bomb survivors were unable to receive the same allowances and medical care to which A-bomb survivors in Japan had access because certificate applications were accepted only in Japan, and even if South Korean survivors possessed one, the certificate was of no use outside of Japan.

Because the plaintiffs were victorious in a series of such legal cases, the government had no choice but to amend its policy. It would have been difficult for A-bomb survivors abroad to access the allowances guaranteed by the relief law without the support received from the citizens’ association.

Nevertheless, it took more than 70 years after the atomic bombings before the obvious conclusion was drawn that such survivors should be provided with aid based on the idea that A-bomb survivors are A-bomb survivors no matter where they are. Junko Ichiba, chairperson of the citizens’ association, reported at the recent commemorative gathering that “most people passed away before they were able to receive support from the government.” She described the situation in which the humanitarian-based, civilian-led movement has made progress, but also highlighted the lack of remorse or apology from the United States for dropping the atomic bombs or from the Japanese government for its colonial rule. In addition, she remarked about how A-bomb survivors in North Korea, with which Japan has no diplomatic relations, have been left behind.

What is at the root of these issues? Former Hiroshima City Mayor Takashi Hiraoka, one of the first news reporters for the Chugoku Shimbun to cover the story on the A-bombing victims in South Korea in the 1960s who was also instrumental in supporting Mr. Son, spoke at the recent gathering about the circumstances prior to the founding of the citizens’ association.

In 1965, Mr. Hiraoka visited South Korea to interview A-bomb survivors prompted by a letter he had received from a male survivor of the Hiroshima atomic bombing living in South Korea who desired medical treatment. Mr. Hiraoka knew there were Korean A-bomb victims, but “they had slipped out of my consciousness for 20 years after the event, something for which I felt ashamed,” he described as he looked back at that time.

It was not easy for Mr. Hiraoka to gain the understanding and support of pacifist organizations and A-bomb survivors’ groups for Mr. Son, which caused him to feel strongly about the issue of Japan’s perception of history and discrimination against Koreans.

Mr. Hiraoka said he in the background to that situation is the idea that “Japanese society became separated from its history on August 15, 1945, the official date of the country’s defeat in World War II, and since then stopped thinking about responsibilities for the war and the colonial rule.” Based on an accurate understanding of history, “A-bomb survivors in Japan and South Korea should join hands to inform the world of the inhumane nature of nuclear weapons,” he stressed.

Ko Odagawa, chair of a different citizens’ council located in Tokyo working for support of A-bomb victims in South Korea; Keizaburo Toyonaga, advisor to the Hiroshima branch of the citizens’ association who also served as chair of the Hiroshima branch for many years; and Nobuto Hirano, chair of the Nagasaki branch of the citizens’ association, also spoke at the commemorative gathering. With Russian president Vladimir Putin hinting at that country’s use of nuclear weapons after Russia launched its invasion of Ukraine, participants reconfirmed the importance of confronting history squarely in order to prevent similar acts.

Looking back on the history of the citizens’ association provides a link back to the people of the A-bombed cities for reconsideration of our own steps.


Keywords
A-bomb devastation of North and South Koreans
According to a survey conducted by the Japanese Home Ministry’s Police Bureau at the end of 1944, 81,863 Koreans lived in Hiroshima Prefecture and 59,573 in Nagasaki Prefecture at that time. In 1972, the South Korean Atomic Bomb Sufferers Association estimated that 30,000 of 50,000 Korean victims of the Hiroshima bombing had died, and 10,000 of 20,000 of the Nagasaki bombing had died. The publication Hiroshima and Nagasaki (Iwanami Shoten, Publishers, 1979) indicates that “determining actual numbers is exceedingly difficult,” but it goes on to say that the number of Korean A-bomb victims in Hiroshima was estimated to be between 25,000 and 28,000, with the death toll numbering between 5,000 and 8,000, and that the number in Nagasaki was estimated to be between 11,500 and 12,000, with the death toll between 1,500 and 2,000. However, actual numbers remain unclear.

The Reverend Kim Shin Hwan, a Korean resident in Japan who passed away this past May at the age of 90, was one who supported the committee’s consistent activities. Born in Aichi Prefecture, he finished his studies at the graduate school of Doshisha University and became a pastor. After studying in South Korea, he was appointed to serve as a senior minister at the Hiroshima Korean Church of Christ in Japan in 1966.

Visiting the homes of adherents, he came to know their harsh reality of poverty and discrimination as well as the aftereffects of the survivors’ exposure to A-bomb radiation. He met Dr. Kawamura, who had been examining patients in South Korea at his own expense, and the two began collaborating with each other. Mr. Kim, a senior executive member of the Hiroshima Committee, organized in 1984, functioned as a bridge to the South Korean government, helping survivors obtain Atomic Bomb Survivor’s Certificates and with paperwork for being admitted to hospitals in Hiroshima. He continued assisting them even after A-bomb survivors living overseas began to receive almost the same level of relief benefits as those provided to A-bomb survivors living in Japan.

Yuzuru Kawamura, the son of Torataro, continued work as the chair of the committee in keeping with the wishes of his late father. He recalled Mr. Kim when he said, “His presence meant so much to us, especially when we sometimes faced a language barrier in communicating with more and more patients who had been very young under the colonial rule that forced Koreans to speak Japanese.”