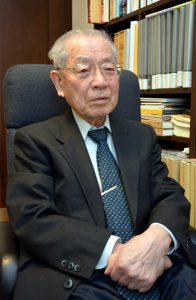 A single atomic bomb annihilated and incinerated Hiroshima within a radius of two kilometers from the hypocenter, instantly claiming the lives of many people who were in that city at the time. The Atomic Bomb Memorial Mound stores to this day the remains of about 70,000 unidentified victims. I experienced the atomic bombing when I was six years old at Hiroshima’s train station, located two kilometers from the hypocenter. As the flames from the fires that arose immediately after the bombing approached, the only thing I could do was run away by stepping on fallen bodies.

With no direct knowledge of the horror of the bombing, Russia has adopted a stance of unwillingness to rule out the option of nuclear weapons use. The people of Hiroshima all need to be more vociferous in insisting that nuclear weapons must never be used.

At the same time, then Hiroshima City Mayor Takashi Hiraoka argued at the ICJ that the use of nuclear weapons was explicitly illegal based on the reality of the atomic bombings, with the court’s advisory opinion also indicating that the use of nuclear weapons was generally in violation of international law. Grounded in that opinion, the Treaty on the Prohibition of Nuclear Weapons (TPNW), which comprehensively prohibits nuclear weapons and their use, was established in 2017. The world’s nuclear powers have yet to ratify the TPNW, but the A-bombed city of Hiroshima must continue to speak out until the treaty forms the basic premise of international society.

In response to Russia’s recent actions, I am certain that people around the world will pay closer attention to Hiroshima and Nagasaki, the two cities on which nuclear weapons were actually used. On the other hand, as the individuals who directly experienced the atomic bombing grow increasingly elderly, the world is now approaching an era in which no A-bomb survivors will remain. Now is, therefore, the time for the A-bombed Hiroshima to reconsider how the horror of the atomic bombing can continue to be effectively communicated into the future.

The exhibits within the Hiroshima Peace Memorial Museum are one facet to reconsider. The fact that the museum has placed the artifacts of victims front and center following the museum’s renovation is a crucial step. However, I believe the exhibits are too neat and tidy. As an example, visitors are not made aware of the stench of the corpses that was present in the city after the bombing. Even though it is impossible to reproduce that kind of situation accurately, I would like the museum to make further efforts to pursue exhibits that enable visitors to draw ever nearer with their five senses to the reality of what the A-bomb survivors actually experienced at that time.

Effective utilization of A-bombed buildings in the city is also necessary. For instance, the former Army Clothing Depot’s buildings, located in Hiroshima’s Minami Ward, were a place of utter despair to which A-bomb victims on the verge of death were admitted and then died without receiving proper medical treatment. The presence of those buildings is important because they can continue to communicate messages imbued with peace even after the A-bomb survivors are no longer here.

When the governments of the A-bombed cities are able to develop a structure through which the horror of the atomic bombings can be effectively communicated to political leaders visiting from around the world as well as to ordinary members of the public, such visits could provide the impetus for concrete action toward the elimination of nuclear weapons. The governments in the A-bombed cities must demand not only that key figures visit and experience their cities but also begin to work on developing, in cooperation with A-bomb survivors and other members of the public, such a structure for communicating the message to visitors.