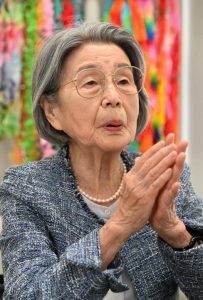 When I see on television the images of cities in Ukraine, my heart aches. Burned out buildings, people crammed into basements without food. Mothers standing paralyzed with their children in their arms. One time, without thinking, I yelled out to the TV imploring the people to “Escape!”

That is all due to my remembrances of that day 77 years ago. August 6, 1945, was just like that in Hiroshima.

I was at a munitions factory in the area of Misasahonmachi (now part of Hiroshima’s Nishi Ward), about 2.3 kilometers from the hypocenter. I was 14 years old and a third-year student at Yasuda Girls’ High School (now Yasuda Girls’ Junior High School and High School). I was making propeller parts for airplanes in my job as a mobilized student.

An intense bluish light came in from the upper windows of the factory. In an instant, I felt a shock as if the earth itself had exploded. The floor right in front of me was blown upward, and my own body floated in the air. I imagined that a bomb must have hit the factory directly. “I’m going to die,” I thought. For a while, I was unconscious.

After some time had passed, I came to and heard a friend of mine crying out for help. Trapped under a collapsed building, I could move only my head and hands. My friend was also trapped under rubble, but she shook a pillar with everything she had and managed to remove herself. I also managed to crawl out. There were shards of glass in my right arm, and my right leg was so deeply cut when I pulled it from a space between pillars that even the bone was visible.

The town outside was so quiet it was frightening. Although it was morning, everything was dark, and I had the impression of being inside a huge ashen vortex. It smelled something like red clay and rotting fish. “Hiroshima is gone,” my friend said to me. The once bustling city had been reduced to rubble.

Upon its invasion of Ukraine, Russia has hinted at the possibility of its use of nuclear weapons. I think to myself about how they must not understand anything at all. The atomic bombing of Hiroshima instantly snuffed out many lives and destroyed the city. But that was not all. Many people have suffered ill health effects from exposure to radiation. Many who were seemingly uninjured in the atomic bombing a bit later lost their hair, coughed up blood, and even died.

The tragedy continues to this day. If their children and grandchildren were ever to fall ill, A-bomb survivors would always worry that the cause might have been their own exposure to the atomic bombing.

I have shared my experiences at the time of the atomic bombing with Pope Francis and leaders from Japan and other countries. The thought that the voices from the A-bombed cities might not have reached nuclear weapon states frustrates me to no end. I truly want those countries to understand that nuclear weapons lead to human tragedy.