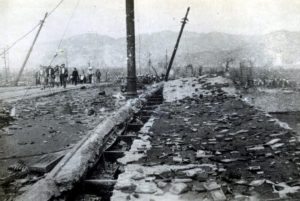 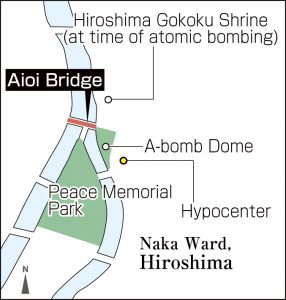 After the atomic bombing by the United States, military personnel and scientists traveled to Hiroshima to conduct surveys and photograph the A-bombed city. The resulting photos showed Hiroshima’s devastation due to the thermal rays and blast from the bombing as well as people suffering from burns and radiation exposure. The photos taken by the survey teams clearly reveal the reality of the tragedy brought about by the nuclear attack. As concerns have resurfaced about the use of nuclear weapons by Russia with its invasion of Ukraine, the tragedy of Hiroshima must be communicated to as many people as possible. By putting together the photos, related materials, and accounts of victims’ family members, the Chugoku Shimbun will consider in this series the reality of the devastation wrought by the use of nuclear weapons.

Displayed in the Yamato Museum in Kure City are photos taken by a survey team sent to Hiroshima from the Kure Naval Station of the former Imperial Japanese Navy. One photo shows the Aioi Bridge with collapsed railing, and another is of a streetcar that had derailed from its tracks and come to a stop a distance away. The photos were taken on August 8, 1945, two days after the atomic bombing by the United States. The photos reveal images of the damage caused by the powerful blast from the atomic bombing.

The photos belonged to Yukinao Kozu, who served as an assistant to the head of the survey team. After his death in 1985 at the age of 74, Mr. Kozu’s wife, Umeko Kozu, donated 24 photos along with a confidential report by the survey team dated August 8, 1945. The report soon after the bombing indicated the possibility that an atomic weapon had been used. The report document was utilized by a joint Japanese Army-Navy panel in their official conclusion on August 10, 1945, that the weapon used on the city was an atomic bomb.

“My father-in-law (Yukinao) would say, ‘I’m glad the survey proved to be of use,’ and with that in mind, we donated the materials to ensure they wouldn’t be scattered and lost,” said Zenzaburo Kozu, 81, chairman of the Kure Chamber of Commerce and Industry. Zenzaburo also serves as chairman of Chugoku Kayaku, a company founded by Mr. Kozu in Kure City in the aftermath of the war.

Four Days of the Atomic Bombing, a memoir written by Mr. Kozu in 1951, describes details of the survey.

Mr. Kozu had studied explosives engineering at Tokyo Imperial University (now the University of Tokyo). After graduation, he performed research into explosive weapons at the Kure Naval Arsenal. On the morning of August 6, 1945, he sensed a “bluish white light” suddenly filling his workplace. The scale of the rising smoke after the bombing convinced many people around him it was an unusual weapon. Based on orders from the Naval station, his coworkers traveled to Hiroshima to gather information.

The next day, August 7, a full-scale survey team was put together. The late Matao Mitsui, a senior officer, headed the group. Mr. Mitsui was involved in the Japanese Navy’s research into the development of atomic bombs, an effort believed to have begun around 1943, and in the procurement of uranium for testing such weapons. He expressed his opinion that the bomb employed nuclear energy, but he is said to have ordered the team to conduct the survey without any preconceptions about the kind of weapon used.

Mr. Kozu’s notes read, “What surprised me (in the city center) was that there was nothing left in the metropolis of Hiroshima except for chimneys and reinforced concrete buildings.” The team divided the city into 10 districts, and the personnel in charge of each area investigated the directions in which buildings and trees had fallen and the extent of damage. Mr. Kozu interviewed an Army soldier who had experienced the atomic bombing. The soldier is quoted as saying, “They must have sprayed sulfuric acid all over the sky.” That explanation, however, failed to explain the vast extent of the damage.

The survey team assumed that the hypocenter was in the southern part of the district in which was located Gokoku Shrine (around the present-day Hiroshima City Youth Center). The team’s report dated August 8 described the distinctive features of the damage: those who were injured had burns only on body parts facing the hypocenter, and glass fragments were found seven kilometers from the hypocenter. The report referred to information related to a statement made by U.S. President Harry S. Truman 16 hours after the bombing and suggested it was highly likely that an atomic weapon had been used.

The photos were taken by Mr. Mitsui and given to a small number of Navy officials as an appendix to the report. Mr. Kozu was also provided with photos. One showed a train timetable at Hiroshima Station on which only the black parts were incinerated. The image indicates that the survey team had a strong interest in the thermal rays generated by the atomic bombing.

The report indicates that the team had considerable capacity to analyze the devastation caused by the bombing, as seen by the hypocenter location being identified with great accuracy. According to notes from the late Toshio Hiraoka, one member of the survey team, the room fell completely silent when the members were discussing what measures they should take to protect themselves given the unprecedented devastation. The report’s suggestion included covering as much of the members’ body surface as possible with clothing, but Mr. Hiraoka wrote that the members were gloomy because they all understood there were no effective measures available.

In his notes describing that time, Mr. Kozu wrote about their emotional pain. “The sight of the wounded was branded into the memories of the members of the survey team, who conjured the images in their dreams each night.” Their hardship was caused because the members had to position their survey, as a military duty, at a higher level of priority than the work of helping the wounded seeking help in front of their eyes.

Mr. Kozu told his family that the photos taken by the survey team “were for research and did not show the terrible state people found themselves in.” The report indicated, “Within a radius of 500 meters from the hypocenter, many victims’ internal organs were exposed.” The horrific situation seemed to extend far beyond the frame of the photos.