Striving to fill voids in Hiroshima, evidence of victims remains—Photos from surveys of devastation, Part 2: Materials provided by physician 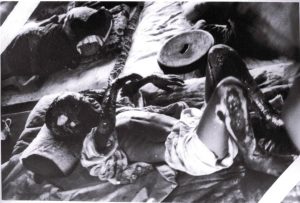 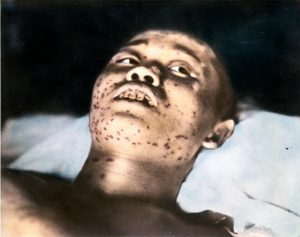 In the Hiroshima Atomic Bomb Casualty Council, an organization located in the city’s Naka Ward that provides health examinations to A-bomb survivors, is an old anthology of photographs whose cover is stamped with the terms “Confidential” and “Shipping Command Medical Department.” The anthology Shi Sensai Kiroku Shashin (Collection of photographs of the war damage in Hiroshima, in English) contains 52 photos that were taken soon after the atomic bombing by members of a photography team belonging to the Japanese Imperial Army’s Shipping Command, located in the area of Ujina-machi (now part of Minami Ward).

The wounded and their suffering were clear from the photos as their yellowed mounts were turned. A child photographed at the First National School (Minami Ward), which functioned as a temporary relief station, suffered severe burns on their arms and legs, making the viewer reflexively try to retreat from the painful sight. The photo details the cruelty and inhumanity of the atomic bombing.

The collection of photographs was donated to the Hiroshima Atomic Bomb Casualty Council in 1973 by Keisuke Misonoo, a specialist in radiation medicine who died in 1995 at the age of 82. He served as a professor at an Army medical college in Tokyo during the war and entered Hiroshima twice immediately after the atomic bombing for survey work. He received the anthology at the time of his involvement in the first survey. The photos therein are believed to have been taken sometime during the period August 7–17, 1945.

In 1979, Dr. Misonoo gave a lecture in Hiroshima City on the surveys conducted after the bombing, in which he reflected upon the changes over time in the symptoms experienced by the victims from a physician’s perspective.

The first survey began on August 14, eight days after the atomic bombing on Hiroshima, and was conducted over a period of six days. Dr. Misonoo joined the survey team as a specialist in radiation dispatched by Japan’s Department of War. As he examined the corpses of victims on Ninoshima Island (now part of Hiroshima’s Minami Ward), where many injured people had been taken, “a considerable level of radioactivity” was confirmed, as he explained in the lecture.

While some victims suffered diarrhea and bloody stools, which were later learned to be the result of radiation exposure, the main symptoms observed in the A-bomb victims were physical injury and burns. “Flames and smoke from the cremation of bodies arose unceasingly along the riverbanks and on Ninoshima Island” because the critically wounded died one after another, he said.

When the Department of War survey team entered Hiroshima on August 30 for the second survey, the symptoms experienced by the patients had changed. “The city was filled with fear of ‘A-bomb disease,’ the main symptoms of which were a pale complexion, bleeding gum, subcutaneous bleeding, and hair loss.” Survivors, both with and without injuries, suffered from such symptoms, which are now known acute radiation health effects.

Masao Tsuzuki, a professor in the faculty of medicine at Tokyo Imperial University (now the University of Tokyo) who died in 1961 at the age of 68, also joined the second survey team, which made the Ujina Branch of the Hiroshima First Army Hospital (now part of the city’s Minami Ward) its base for investigation. Gonichi Kimura, a member of the Army’s Marine Training Division (Minami Ward) who died in 1973 at the age of 68, took photos of patients admitted to the Ujina Branch at the request of Dr. Tsuzuki and the team.

One of those photos is displayed at the Hiroshima Peace Memorial Museum under the caption “Soldier with ‘Spots of Death.’” It was taken on September 3, 1945. The man in the photo died that same day. The team’s report from that time records how the patient’s condition changed over time.

A 21-year-old man was exposed to the atomic bombing in his wooden house about one kilometer from the hypocenter. On August 18, his hair started to fall out. On August 29, his gums started to bleed. His white blood cell count dropped precipitously from a normal level, and “spots” caused by subcutaneous hemorrhage due to a decrease and loss of function of blood platelets became apparent. According to the report, other patients died of similar symptoms in early September.

Destruction of hematopoietic (or blood production) functions, including bone marrow, and decreased white blood cell and blood platelet counts are at present understood to be the result of A-bomb radiation. Especially notable from pathological specimens of A-bomb victims archived at Hiroshima University is that the bone marrow of those who died within three to four weeks after exposure, around the same time as the death of the “Soldier with ‘Spots of Death’,” was incapable of normally producing blood.

At the end of 1945, the acute symptoms of radiation exposure began to subside. According to a report listing the actual number of A-bomb victims issued by the Hiroshima City government nine years ago, at least 79,989 people whose names could be identified had died by the end of August 1945, with 8,981 dying during the period from September 1 to the end of December 1945.

The painful appearance of the wounded and patients in the photos communicate to the present day about how, even after that day, the bombing caused so many to suffer and die.