Striving to fill voids in Hiroshima, evidence of victims remains—Photos from surveys of devastation, Part 3: A physicist’s look at things 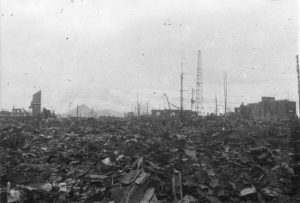 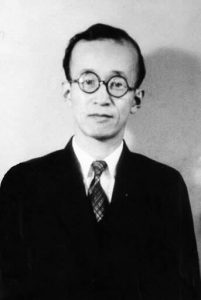 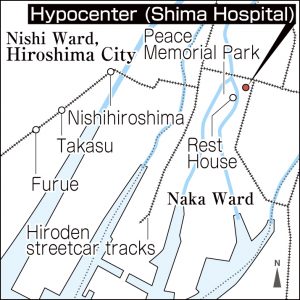 Impact at hypocenter was overwhelming
Nuclear weapons should be banned for the sake of humankind
by Kyosuke Mizukawa, Senior Staff Writer

The second survey team for investigating the devastation of Hiroshima was dispatched by Japan’s Department of War and entered the city of Hiroshima on August 30, 1945. In addition to medical professionals, the group included specialists in the study of residual radiation. One was Masao Yamasaki, a nuclear physicist who died in 1981 at the age of 74. At the time, he was a member of the Institute of Physical and Chemical Research (Riken), headquartered in Tokyo.

Mr. Yamasaki kept a detailed diary since the days of the war. A copy of the diary from the time of the survey is archived at the Hiroshima Peace Memorial Museum.

Disaster different from that in Tokyo

On August 30, when Mr. Yamasaki arrived in Hiroshima at the train station, he was shocked by all the collapsed and partially destroyed buildings. In an August 30 diary entry he wrote, “The roofs and other parts of the buildings give the impression of having been trampled and walked on by giants.” On September 1, after walking around the city center, he wrote, “What is drastically different from Tokyo’s burned ruins is that every stone structure is destroyed, giving the sense that the area was devastated by a major earthquake, a big storm, and a conflagration.

The area within about two kilometers from the hypocenter of the atomic bombing was annihilated and incinerated by the atomic bombing’s fierce blast and thermal rays. Mr. Yamasaki photographed the damage during his stay in the city through September 6. He also photographed the ruins in the area of Saiku-machi (now part of Hiroshima’s Naka Ward), the area in which the hypocenter was located. That photo is believed to be the earliest one taken of that area after the bombing and is valuable because it paints a picture of the situation prior to the Makurazaki typhoon hitting Hiroshima on September 17.

Mr. Yamasaki was 38 at the time and a member of the late Yoshio Nishina’s laboratory, which was the center of nuclear physics research in Japan. During the war, the laboratory was commissioned by Japan’s Army to engage in the research and development of atomic bombs. In 1944, a thermal diffusion tower was built at Riken in an attempt to enrich uranium 235, which was required for weapons’ production, and experiments with the technology were being conducted.

Mr. Yamasaki was involved in examining the uranium being worked on in the tower to determine whether or not enrichment had been successful. Enrichment never succeeded, however, and the tower was destroyed in an air raid in April 1945. In his diary annotation dated May 10, he made a note indicated that the last processed uranium also had been a failure.

Roughly three months later, on August 6, 1945, the United States dropped an atomic bomb on Hiroshima. Two days later, on August 8, Mr. Nishina joined a survey team dispatched from the Japanese Imperial General Headquarters as a specialist. At Riken, Mr. Yamasaki was also involved in the work related to radiation measurement of soil samples taken from Hiroshima.

During the survey of Hiroshima, Mr. Yamasaki drove around the city with an electroscope in his vehicle to measure residual radiation and examine changes in the measurements. According to Mr. Yamasaki’s paper published in 1953, after the end of the occupation of Japan by the Allied forces, the intensity of the radiation had risen in the Takasu and Furue areas in the western part of the Hiroshima, and the eastern part of Furue, where the radiation levels were highest, was measured to have the same radiation levels as areas around the hypocenter. When he examined sediment accumulated in rain gutters in the same areas, he found particularly strong radiation.

In the western part of Hiroshima, black rain fell after the atomic bombing. Mr. Yamasaki’s research is still often referred to as fundamental data regarding the presence of radioactive fallout in the rain.

Mr. Yamasaki recorded details of the field survey in his notebooks. His eldest son, Kazuo, 82, a researcher in biopharmaceutics and professor emeritus at Hiroshima University who lives in Kamakura City, Kanagawa Prefecture, said with admiration, “My father was committed to the fundamentals of science, by which everything was recorded in detail and experimental data were highly treasured.” He has donated copies of his father’s notebooks and diary to the Hiroshima Peace Memorial Museum.

Continued to be devoted to research even after war

Mr. Yamasaki continued his radiation-related research at Riken after the war. Kazuo said, “He consistently called for the peaceful use of nuclear energy.” Mr. Yamasaki argued vehemently that nuclear weapons must be banned.

Mr. Yamasaki’s thoughts are delineated in his article contribution to the magazine “Pros and cons of radiation” in 1954. That year, the tuna fishing boat named the Daigo Fukuryu Maru was exposed to radiation from a U.S. hydrogen bomb test conducted at Bikini Atoll, and Mr. Yamasaki was involved in the measurement of that radiation.

In his article to the magazine, he emphasized his fear of the “ashes of death,” describing the radioactive fallout from the hydrogen bomb, while at the same time explaining the variety of uses of radiation in the medical and industrial fields. He noted that he thought banning atomic weapons was the most urgent decision for humankind and explained the obligation of the A-bombed country of Japan to call on the world to ban the weapons.

Last year, the Treaty of the Prohibition of Nuclear Weapons (TPNW) entered into force. However, nuclear weapon states have not yet joined the treaty agreement. Japan’s national government also has turned its back on the treaty. There is not yet a path toward fulfillment of the appeal to ban the weapons made by Mr. Yamasaki, who was involved in the research and development of atomic bombs in his own country and witnessed the horror of nuclear weapons through the U.S. military’s atomic bombing.