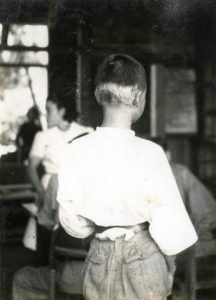 With the advent of spring, the number of students visiting Hiroshima Peace Memorial Museum (in the city’s Naka Ward) has increased noticeably. In the special exhibition titled “The Atomic Bombing and the Medical Care” being held by the museum through mid-September, medical materials not displayed in the museum’s permanent exhibitions are being made available to the public. Some are photographs of A-bomb victims taken as part of a survey conducted by what used to be known as Kyoto Imperial University (now Kyoto University).

Two of the photos on display were taken in September 1946, roughly one year after the atomic bombing. One shows a boy from behind with a burn scar in the area behind his ears. A note indicating that scarring was formed “In the shape of a cap” is inscribed on the photo mount. The photo appears to record the different degrees of burns on his head depending on what area was covered by the cap. The photograph speaks to the reality that the atomic bombing had left great scars on survivors even one year later.

The photographs were kept by Shigeyuki Itoi, a physician who had participated in the survey team and died in 2007 at the age of 88. According to a memoir he had written before his death, the reason he decided to join the survey team was not simply for research purposes. “I wanted to do something for fellow citizens who experienced the disaster.”

The Kyoto University survey team, led by the late Takehiko Kikuchi, then a professor and physician, was organized at the request of the Chugoku Military District Headquarters, which was situated in Hiroshima. Dr. Itoi, who was Dr. Kikuchi’s assistant at the time, also participated in the survey team. In September 1945, the team entered Hiroshima and started treating patients and performing blood tests at the Ono Army Hospital (now part of Hatsukaichi City), located about 20 kilometers from the city.

Later, on September 17, the hospital was hit by a mudslide caused by the Makurazaki typhoon. Eleven members of the team were killed, and the gathered samples and materials were also lost. Dr. Itoi, who happened to be back in Kyoto at the time of the typhoon and had survived, continued providing medical care to the A-bomb survivors based out of the Ushita National School (now part of Hiroshima’s Higashi Ward), among other locations, while conducting the health survey at the same time. The team would fill out survey forms with such information as patient circumstances when they experienced the bombing and their symptoms. That work continued until 1949.

Acute symptoms of radiation exposure, such as decreased white blood cell count, seemed to have subsided by the end of 1945. However, Dr. Itoi recalled that the patient recovery situation, scars, and symptoms started differentiating the following year, 1946.

From Dr. Itoi’s memoir, “It was delightful that grass and trees began to grow and people gradually had their vitality restored, but there were still many suffering from appalling keloids caused by burns from the atomic bombing and those with organ and blood aftereffects.” A report compiled from the survey carried out during the period August–September 1946, the time when the photos of the survivors had been taken, pointed out the need to continue conducting the survey, noting such symptoms as keloids and general malaise.

Later, Dr. Itoi worked as a physician at hospitals in Osaka Prefecture and elsewhere. He hung on to the 14 photographs taken during the survey. His oldest daughter Kyoko Tanaka, 75, a resident of Ashiya City in Hyogo Prefecture, said, “I think his experience in Hiroshima became an unforgettable memory for my father.”

Dr. Itoi did not speak much about those experiences to his family, but they were mentioned frequently in his memoir. The 1991 memoir, titled Moshi Anokokeiga Hozonsareteitara (in English, If that scene had been preserved), referred to the scenes of devastation in the A-bombed city and the reality of damage there, emphasizing the importance of having “the determination to oppose nuclear war and to never forgive the atomic bombing.”

“Not only a story from the past”

In 2016, nine years after the death of Dr. Itoi, Ms. Tanaka and her family donated the photos to the Hiroshima Peace Memorial Museum. The special exhibition is being held amid growing concern that Russia, which has invaded Ukraine, might use nuclear weapons. “For us, nuclear weapons are not only a story from the past,” Ms. Tanaka said, recalling her father’s experiences and photos.

The A-bomb photos that remained with the report were taken as part of military work soon after the atomic bombing of Hiroshima, through which the miserable situation of the entire city from both medical and geological perspectives is evident. Because the photos were taken as part of the survey, wounds and aftereffects from the bombing, which people would hesitate to take if the subject of the photos were a family member or friend, were recorded by camera. The photos underscore the inhumane nature of nuclear weapons.