Striving to fill voids in Hiroshima, evidence of victims remains—Photos from surveys of devastation, Part 5: The seismologist 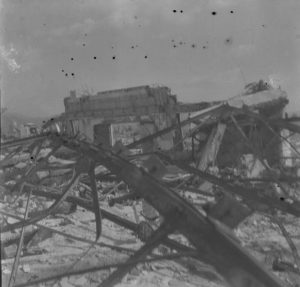 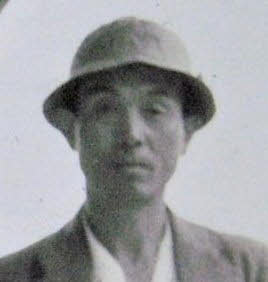 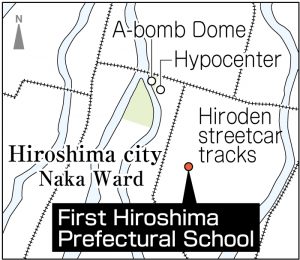 The photograph captured the burned and broken down ruins of the auditorium of the First Hiroshima Prefectural School (now Hiroshima Kokutaiji High School, located in the city’s Naka Ward). Kiyoshi Kanai, an engineer at the Earthquake Research Institute of Tokyo Imperial University (now the University of Tokyo) who died in 2008 at the age of 100, took the photo with another staff member of the institute in November 1945, as part of a team surveying the devastation caused by the atomic bombing. The First Hiroshima Prefectural School was Mr. Kanai’s alma mater, from which he had graduated 20 years earlier.

Mr. Kanai graduated from the First Hiroshima Prefectural School in 1925 and went on to attend the Hiroshima High Institute of Technology (now the Faculty of Engineering at Hiroshima University). After graduating, he worked as a teaching assistant at the university. However, after a school friend studying at Tokyo Imperial University told him that a professor there was looking for an assistant, he visited a laboratory at that university’s Earthquake Research Institute. Mr. Kanai obtained the assistant position at Tokyo Imperial University in 1931 on the strength of his ability in mathematics.

Following the atomic bombing of Hiroshima by the U.S. military on August 6, 1945, and the subsequent atomic bombing of Nagasaki, Japan’s then Ministry of Education, Science and Culture gathered researchers from a variety of fields and established a special committee for surveying the A-bombing devastation in September of that same year. Mr. Kanai entered Hiroshima City as an engineer at the Earthquake Research Institute, together with Toshio Maeda, a teaching assistant at the institute.

According to the “Journal of Professor Kanai’s Lab,” written by Mr. Maeda and now archived at the Hiroshima Peace Memorial Museum, Mr. Kanai and Mr. Maeda arrived at the Hiroshima train station on the morning of October 18. They carried out a series of surveys of Hiroshima through November 8, taking about 80 photos, while also conducting a survey of Nagasaki and, in between, returning to Tokyo. The results of their surveys, which also estimated the locations of the hypocenters by examining traces of A-bomb thermal rays remaining on buildings, were published in 1953, together with seven photos, in a collection of reports after the end of the Allied occupation of Japan.

The aforementioned photo of the First Hiroshima Prefectural School was taken on November 6 during the last stage of the survey work. Located about 900 meters from the hypocenter, the school’s buildings were all completely destroyed and burned to the ground. A total of 353 students, mainly first-year high-school students who had been mobilized to demolish houses to create fire lanes in the city for the war effort, and 16 school staffers died in the atomic bombing.

Mr. Kanai, who rarely mentioned the horrific consequences of the atomic bombing he had witnessed during the survey work, wrote only that “The situation is beyond description” in the memoir published on his 88th birthday. Mr. Kanai worked intently on research into earthquake engineering after the war, serving as president of the Seismological Society of Japan and vice president of Nihon University until his death in 2008.

“I heard from Mr. Kanai’s wife that, while alive, he had been concerned about materials related to the atomic bombing,” said Kazuyoshi Kudo, 78, a resident of Tokyo and former associate professor at the Earthquake Research Institute whose friendship with Mr. Kanai grew deeper as they grew older. Mr. Kudo was entrusted with the unsorted materials at Mr. Kanai’s home by his surviving family members in 2016. Records of the survey conducted in Hiroshima were included among the materials, which had been stored in eight cardboard boxes.

Reading notes related to the survey of the A-bomb devastation and a draft of the research report, Mr. Kudo discovered, among the materials, a handwritten manuscript titled “Experience of the A-bombing air raid.” The manuscript was not written in Mr. Kanai’s handwriting. Investigating further, Mr. Kudo found that the document was an account of the atomic bombing written by Seiji Kimoto, a school friend of Mr. Kanai at the First Hiroshima Prefectural School and former professor in the Faculty of Medicine at the University of Tokyo who died in 1995 at the age of 87. Mr. Kanai seemed to have borrowed the account from Mr. Kimoto, also a Hiroshima native who experienced the atomic bombing in the area of Ushita-cho (now part of Higashi Ward), and had his assistant transcribe the account.

“The force from this bomb, which killed and obliterated all living things within a certain distance from the hypocenter, is truly beyond imagination.” Mr. Kimoto provided clinical observations, in what would be considered typical of a physician, throughout the entire account. Touching on the damage to his alma mater, he mentioned that “Among 300 first-year students of a certain school, only five or six survived.”

Mr. Kudo never heard about the atomic bombing from Mr. Kanai. Mr. Kudo said he believes Mr. Kanai considered the survey of the A-bomb devastation to be “genuine research.” All the more because of that, it seems somewhat surprising to Mr. Kudo that Mr. Kanai held on to the A-bomb account of his friend. “I can only imagine at this point, anyway, but Mr. Kanai might have discussed the atomic bombing with Mr. Kimoto, his friend from the First Hiroshima Prefectural School,” said Mr. Kudo.

In November 2018, Mr. Kudo finished organizing the materials and donated them to the Hiroshima Peace Memorial Museum. "The survey of the A-bombing devastation was a remarkable achievement by Mr. Kanai and Mr. Maeda. I feel secure in the knowledge that the materials are now archived at the museum.” The seismologist witnessed the complete destruction of his alma mater. Mr. Kanai left behind 255 items, including photos, photographic film, and notes.