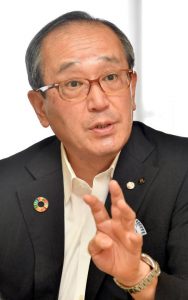 Job of politics is to strike balance between realism and idealism
by Tsuyoshi Kubota, Staff Writer

After invading Ukraine, Russia suggested it could use nuclear weapons. As countermeasures against Russia, opinions have come to the fore in various countries that would allow for the possession of nuclear weapons or protection under a so-called ‘nuclear umbrella.’ The First Meeting of States Parties to the Treaty on the Prohibition of Nuclear Weapons (TPNW) is set to begin against such severe headwinds.

Now is the time to calmly analyze the present situation. How should the absolute evil of nuclear weapons be eliminated, not as an issue for any single country but for all of humanity and the entire world? The short-term, stopgap measure of nuclear deterrence will further destabilize the world. We need to find fundamental, long-term solutions. Posing issues of this nature will serve as a pillar of the TPNW meeting.

Japan’s Prime Minister Fumio Kishida, elected from the A-bombed city of Hiroshima representing Hiroshima Prefecture’s District No. 1, has assessed the TPNW as an extremely important treaty that will serve as an ‘off-ramp’ in changing course to pursue a world free of nuclear weapons.

It is highly appreciated that the Kishida administration recognizes the significance of the treaty. Japan’s national government had previously opposed the treaty on the grounds it would undermine the Nuclear Non-Proliferation Treaty (NPT), which the United States supports. However, the Kishida administration has positioned the NPT as an ‘on-ramp’ to advance non-proliferation of nuclear weapons and nuclear disarmament, and the TPNW as an ‘off-ramp’ toward the abolition of nuclear weapons.

Meanwhile, Japan’s national government has announced it will not participate in the TPNW meeting. Explaining that not a single nuclear weapons state is attending the meeting, it has decided to not attend even as an observer, a status that is available for even non-states parties.

I suppose now, with Japan standing at the entrance, is not the best time to discuss a way out. In light of North Korea’s program to develop nuclear weapons, I believe the government has deemed it important to discuss Japan’s security and take measures that will provide immediate effects. I would not reject deliberations about what might appear to be stopgap measures.

However, I would like the national government to at least proceed with support for both the NPT and the TPNW simultaneously, without downplaying measures aimed at achieving the goal of the abolition of nuclear weapons. It is the job of politics to strike a balance between realism and idealism, and what would best symbolize that job is observer participation in the meeting. A country can join the treaty along the way during the process from non-proliferation to prohibition and eventual abolition.

Like Japan, Germany and Norway are countries protected under the so-called ‘nuclear umbrella’ provided by the United States, and they have decided to participate in the TPNW meeting as observers. Mr. Matsui will meet with the Ambassador for Disarmament from the Norwegian Ministry of Foreign Affairs in Vienna, where he is to travel to attend the TPNW meeting.

Some countries will participate in the TPNW meeting to use the forum as a place to pursue their ideals, even knowing that nuclear weapons states will not be in attendance. In that case, I think Japan, a country that is home to A-bomb survivors, should also participate in the meeting. How did Norway, a member nation of the North Atlantic Treaty Organization (NATO), a group based on the concept of nuclear deterrence, reach the decision to participate in the TPNW meeting as an observer? I hope to ask the Norwegian ambassador for disarmament about this point in detail. If there is a way of thinking about this issue that can be adopted generally, I believe there are points that could be adopted by Japan while taking its own national circumstances into consideration.

Mr. Matsui will address the TPNW meeting on the initial day.

From a humanitarian perspective, the TPNW can be considered a “bible” of sorts for the realization of a true peace desired by civil society. A-bomb survivors have high expectations for the treaty and hope that the devastation caused by nuclear weapons is never repeated. Despite the limited amount of time for speaking at the meeting, I hope to communicate such thoughts and feelings of A-bomb survivors to people around the world.

Profile
Kazumi Matsui
Joined Japan’s Ministry of Labour (now the Ministry of Health, Labour and Welfare) in 1976. After serving as head of the Employment Measures for the Elderly Division and as Secretary-General of the Central Labor Relations Commission, he was elected to serve as mayor of Hiroshima City for the first time in 2011 and is now serving his third term. Born in Hiroshima’s Higashi Ward, Mr. Matsui is 69 years old.