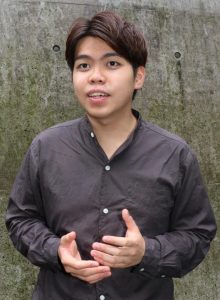 In conjunction with the First Meeting of States Parties to the Treaty on the Prohibition of Nuclear Weapons (TPNW), held in Vienna, Austria, Yuta Takahashi will visit the meeting venue with three other members of the organization KNOW NUKES TOKYO. The group, composed of young people, is working with the aim of abolition of nuclear weapons. Before leaving for Vienna, the group applied for the “Youth Communicators for a World without Nuclear Weapons” program and received an appointment from Japan’s Ministry of Foreign Affairs.

At the conference venue, in addition to observing the conference proceedings, the KNOW NUKES TOKYO members intend to inform the international community about the lives of A-bomb survivors, the suffering they have endured, and the inhumane nature of nuclear weapons, all while wearing Japanese kimono borrowed from the survivors. Many A-bomb survivors are unable to visit the venue due to being elderly despite their desire to be present. We will therefore carry their regrets on our backs and convey the nuclear weapons’ abolition message.

Japan’s national government has refused to participate in the TPNW meeting of signatory nations as an observer. On the other hand, it has appointed the members of KNOW NUCLEAR TOKYO who are to visit the venue to serve as “Youth Communicators for a World without Nuclear Weapons.” I do not want the government to think it has fulfilled a certain responsibility as the A-bombed nation simply by appointing us to that position. It makes sense if the government of the A-bombed nation of Japan were to participate in the conference, which would lead the international community in the direction of the abolition of nuclear weapons. We will continue to urge Japan’s government to attend the conference as an observer.

Mr. Takahashi founded the KNOW NUKES TOKYO group together with university students from Nagasaki last May. The group has called for the abolition of nuclear weapons through social media, online events, and so on.

Shortly after beginning my studies at college, a student in the same department said to me, “I think your activities are important, but the abolition of nuclear weapons is unrealistic.” I wanted to argue with him, but I was unable to do so. I realized then that I cannot make people or society act simply based on an emotional appeal. With that, I started to deepen my knowledge about nuclear weapons, exert greater effort to connect with those who share a common awareness of the issue, and eventually formed the KNOW NUKES TOKYO organization. The issues surrounding nuclear weapons involve many people, not only those associated with the A-bombed cities. That is the reason we decided to use “Tokyo” in the group name, not the names of the A-bombed cities of Hiroshima or Nagasaki.

The origin of the group’s activities was involvement with Haruko Moritaki, who has long been at the forefront of anti-nuclear and peace activities, the late Sunao Tsuboi, who served as chair of the Hiroshima Prefectural Confederation of A-bomb Sufferers Organizations (Hidankyo), and people he met through activities of a human rights club at Eishin Junior & Senior High School (located in Hiroshima Prefecture’s Fukuyama City).

Shortly after I joined the club as a first-year student in junior high school, I listened to a speech by Ms. Moritaki. It contained a variety of difficult themes, such as depleted uranium bombs, and to be honest, at that time, I was unable to understand 90 percent of what she said. However, what I learned from the remaining 10 percent was that there were people working against society’s absurd contradictions at the risk of their own lives. As an elementary school student, I was bullied. There were times when I gritted my teeth and went to school. As a result, I find it hard to just let such absurdity go. The life and words of Ms. Moritaki inspired and encouraged me to start the activities in which I am now engaged.

Mr. Tsuboi, whose life I had heard about through our club activities, also had a great impact on me. He always kept his posture upright and effused vigor. But when he talked about his experience of attempting suicide after being discriminated against in marriage because he was an A-bomb survivor, he cried and appeared vulnerable. While revealing his own pain, he taught us that nuclear weapons cause pain and suffering that never heals.

I owe what I am now to people who communicated such messages to me. On the other hand, there are politicians at home and abroad who continue to rely on nuclear weapons. We younger generations will bear the negative legacy these politicians try to irresponsibly leave behind. That is the reason I take action. My work is my way of showing appreciation to those who have taught me such invaluable lessons.