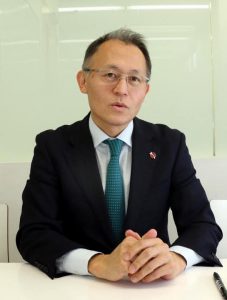 Time to change concept “nuclear for nuclear”
Contradiction in government’s desire to serve as bridge
by Tsuyoshi Kubota, Staff Writer

The First Meeting of States Parties to the Treaty on the Prohibition of Nuclear Weapons (TPNW) will finally be held after a five-month postponement due to the coronavirus pandemic. During that time, following its invasion of Ukraine, Russia suggested it might use nuclear weapons. A movement relying on nuclear weapons to respond to such threats has since spread worldwide.

While Russia has threatened the world with the use of nuclear weapons, the northern European nations of Finland and Sweden applied in May for admission to the North Atlantic Treaty Organization (NATO), a nuclear alliance of European and North American countries. We must halt the momentum behind the concept of matching nuclear force with equal nuclear force and switch to a consciousness of abolition of nuclear weapons. One of the means to achieve that end is the TPNW, and to this point, the first meeting of signatory nations is truly important.

One of the issues to be discussed at the TPNW meeting is the inhumane nature of, and risk inherent in, nuclear weapons. A warning appears likely to be issued in a manner focused on the war in Ukraine, which carries with it the risk of nuclear weapons’ use. Deliberations are expected to proceed regarding the process of dismantling nuclear weapons when a nuclear weapons nation signs the treaty, with the deadline for the dismantling of such weapons to be determined first. Efforts designed to increase the number of signatory nations will also be discussed.

Assistance for victims of nuclear weapons and remediation of environments that have been impacted by the use and testing of nuclear weapons are also important agenda items. As evidenced by Japan’s history, in which people exposed to “black rain” outside of the government’s specified zones and A-bomb survivors living abroad were excluded from support for survivors, A-bomb survivor designation can be disregarded. Therefore, it is important to confirm the principle for supporting a diversity of different nuclear victims without discrimination based on gender, age, status as indigenous peoples, or any other factors. It is also hoped that an agreement can be reached for the creation of an organization to discuss the conduct of the treaty.

In conjunction with the TPNW meeting of signatory nations, A-bomb survivors in Japan will visit the meeting venue to communicate the reality of the atomic bombing and call for the elimination of nuclear weapons.

The people who can convey with a greater sense of conviction than anyone else that nuclear weapons cannot be tolerated are those who suffered directly from such weapons. The power of facial expressions and the passion of such speakers are so convincing that listeners immediately tune in with their imaginations. If young people around the world are provided more opportunities to listen to the voices of A-bomb survivors at the community level, the number of people who continue to work toward the elimination of nuclear weapons over the long term will increase throughout the world. The voices of A-bomb survivors can produce the effect of ‘planting seeds.’

Japan, the only country in the world to have experienced atomic bombings, has yet to ratify the TPNW and has decided to not participate in the meeting as an observer. On the other hand, Prime Minister Fumio Kishida, representing Hiroshima Prefecture’s District No. 1, has decided to host the G7 summit meeting (attended by the Group of Seven industrialized nations) in Hiroshima, based on the opinion that, “There is no better place than Hiroshima to show our commitment to peace.”

Now that the stage has been set for discussions to take place on specific efforts regarding the dismantling of nuclear weapons and assistance for victims of nuclear weapons, there are many ways in which the only A-bombed country in the world can contribute. We await Mr. Kishida’s political decision on the morning of the meeting giving the go-ahead for Japan to participate in the conference as an observer. It is my great hope that Hiroshima citizens, who elected Mr. Kishida to serve as a representative of their district, will continue to speak out and encourage a positive decision in that regard.

Profile
Akira Kawasaki
Born in Tokyo in 1968 and graduated from the University of Tokyo. Mr. Kawasaki has held various positions, such as deputy chair and co-chair of the International Campaign to Abolish Nuclear Weapons (ICAN), a non-governmental organization (NGO). He also serves as co-chair of the Peace Boat NGO.

An organization that made significant contributions to the establishment of the TPNW in 2017 is ICAN (headquartered in Geneva, Switzerland), for which Mr. Kawasaki serves as a member of the international steering committee. ICAN, composed of NGOs in more than 100 countries, received a Nobel Peace Prize in 2017. It persuaded the governments of all countries to accelerate the creation of the TPNW even without involvement of nuclear weapons states. It continued to raise awareness through numerous activities, including the holding of citizen forums in different countries throughout the world. At present, 62 countries and regions have ratified the treaty.

Japan and countries that rely on nuclear deterrence, however, have not joined the treaty. Japan did not participate in the TPNW’s negotiations conference held in 2017. Nuclear weapons states have leveled criticisms at the treaty including that the treaty does not advance nuclear disarmament and actually undermines the NPT regime and that safety and security cannot be maintained without nuclear deterrence. Some countries argue that the TPNW can complement and is compatible with the NPT. However, there has been no indication that any of the nuclear weapons states will join the TPNW.