U.N. Secretary-General urges nuclear weapon states to commit to “no first use,” the first such reference, pledges solidarity with A-bombed cities, Hiroshima, August 6 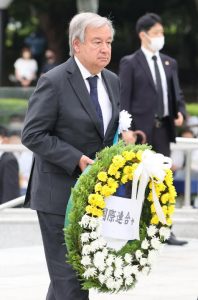 U.N. Secretary-General Antonio Guterres for the first time attended the Peace Memorial Ceremony held in Hiroshima on August 6. He conveyed a strong message to the world shaken by the Ukraine crisis: “Nuclear weapons are nonsense,” and “Heed the message of the hibakusha.” Mr. Guterres also met with A-bomb survivors and leaders of Hiroshima, pledging solidarity for the realization of a world without nuclear weapons.

In his speech delivered during the ceremony, he condemned nuclear weapon states, saying, “Humanity is playing with a loaded gun.” He also used some other strong expressions too. He said “Countries with nuclear weapons must commit to the ‘no first use’ of those weapons.” This is said to be the first such call by the secretary-general.

Mr. Guterres also met with five A-bomb survivors. The beginning of their meeting was open to the press. He said he had come here to show solidarity. A-bomb survivors had their family members killed, their hometowns destroyed, and are suffering from the after-effects of radiation. Mr. Guterres stressed that remembering their voices is the only guarantee nuclear weapons would not be used again. He said, “Arigato” in Japanese, expressing his gratitude to the survivors.

Megumi Shinoda, 90, a resident of Naka Ward, attended the meeting with Mr. Guterres. She said Mr. Guterres said behind closed doors that he would definitely pass on the experiences and thoughts of the A-bomb survivors. She said, “I was feeling unsure about how long I would be able to continue sharing my experience, but I’ve come to feel that I have to keep going.”

Shingo Naito, 83, a resident of Minami Ward, said, “I felt his seriousness for the elimination of nuclear weapons.” Mr. Naito told of his experience of losing five members of his family in the atomic bombing. Only his mother and he survived, but she died of illness eight years later. He said that he also raised the question about the current situation in the U.N., where the permanent members of the Security Council, which have the right to veto, are all nuclear weapon states. “I felt that Mr. Guterres also felt that this was a problem, and he pledged that he would work perseveringly,” said Mr. Naito.

Mr. Guterres also had meetings with Hiroshima Mayor Kazumi Matsui and Hiroshima Governor Hidehiko Yuzaki separately. They confirmed they would work in concert toward nuclear abolition. The City of Hiroshima presented Mr. Guterres with the title of special honorary citizen. They also said Mr. Guterres expressed his support for the prefectural government’s effort to include the abolition of nuclear weapons in the next U.N. goals.