Expectations and requests of Hiroshima as host of G7 summit: Hidehiko Yuzaki, Hiroshima Prefectural Governor, seeks out how prefecture’s efforts can be aligned with summit’s goal of elimination of nuclear weapons 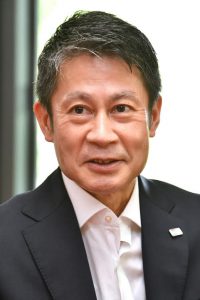 What was your intent in directly requesting Prime Minister Fumio Kishida to set up a forum for dialogue between national leaders and A-bomb survivors in Hiroshima in conjunction with the G7 summit meeting (attended by the Group of Seven industrialized nations) to be held next year in Hiroshima?

We want the G7 leaders to be aware of the actual circumstances surrounding the atomic bombings and lay the foundation for them to more deeply consider the issue of peace. I also feel that Prime Minister Kishida has a strong commitment to such a view.

Under circumstances in which Russia has threatened the international community with nuclear weapons and North Korea continues its progress in nuclear and conventional missile development, do you think holding the summit in the A-bombed city of Hiroshima can turn things around?

When people come to Hiroshima, they will be able to grasp the fact that a single atomic bomb resulted in the deaths of more than 100,000 people. I am sure the leaders will come to believe more strongly that the use of nuclear weapons should never be allowed. To abolish nuclear weapons with a long-term view, it would be a positive if we could take even one or two steps forward as a result of the summit.

The Hiroshima Prefectural government has developed the Hiroshima Initiative and worked on related activities to ensure that the issue of the elimination of nuclear weapons can be included among the next goals for the United Nations following the current UN Sustainable Development Goals (SDGs). Do you think the summit will create a good opportunity to gain widespread agreement with your aim?

The G7 summit is a major event that will garner a lot of attention. We need to look into whether our activities can be aligned with those of the summit, and what kind of impact can be generated through any such alignment.

Next fiscal year, Hiroshima Prefecture is planning to hold a “Group of Friends” meeting of government officials representing nations striving for the elimination of nuclear weapons.

We want to consider whether we can hold that meeting in conjunction with the G7 summit, for which media from around the world will gather in Hiroshima.

Other than the nuclear disarmament issue, what sorts of topics do you expect will be discussed at the summit?

I would be grateful if discussions at the summit can lead to constructive actions for world stability, including issues related to global warming and food shortages.

As an example, the town of Osakikamijima-cho in Hiroshima Prefecture has promoted research to effectively utilize carbon dioxide (CO2) emitted from coal-fired power plants. As the supply of fossil fuels has become more unstable due to Russia’s invasion of Ukraine, that research could contribute to a more stable energy supply if CO2 emissions from coal-fired power generation could be limited. I would appreciate the chance to have the G7 leaders during the summit recognize that such an option is available.

How are you going to make efforts to spread the ripple effects from the summit more broadly throughout the prefecture?

Scenes of G7 leaders lining up at symbolic locations in Hiroshima will be broadcast via the media of each nation over and over. Hiroshima Prefecture will propose the locales for the creation of such scenes to Japan’s Ministry of Foreign Affairs. The prefecture’s infrastructure needs to be updated to a certain extent. We will start looking into what needs to be done for roads, telecommunications infrastructure, and information guide signs. Because many international media organizations will visit Hiroshima to report on the summit, we want to convey the attractiveness of Hiroshima from many aspects, such as its culture, history, and food, not only the atomic bombing.

Profile
Hidehiko Yuzaki
Mr. Yuzaki began work at Japan’s Ministry of International Trade and Industry (now the Ministry of Economy, Trade and Industry) in 1990 and left the office in 2000, after serving as Deputy Director of the Americas Division and being sent on loan to a U.S. investment company. That same year, he became involved in the establishment of a telecommunications company, serving as its vice president. He was elected governor of Hiroshima Prefecture for the first time in 2009 and is now serving his fourth term. He was born in Hiroshima City’s Saeki Ward and graduated from the Stanford University’s School of Business. He is now 56 years of age.