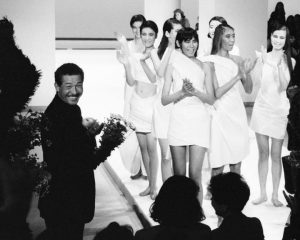 Issey Miyake, the fashion designer, brought novel clothing to the world, defying conventional ideas of fashion. His desire for peace lay at the basis of his creations which he was devoted to, while he had kept his experience of the atomic bombing in Hiroshima to himself. On August 9, the day when the news of his death was announced, Mr. Miyake’s fellow alumni in his hometown Hiroshima, and other associates who explored a course of design together with him grieved over his death.

Hiroshi Takahashi, 82, an architectural designer in Kawaguchi, Saitama Prefecture, went to the same schools as Mr. Miyake, which were Onaga Elementary School in Hiroshima’s Higashi Ward and Hiroshima Kokutaiji High School in Naka Ward. Mr. Takahashi said, “Though he was shy, he had a strong will. Ever since he was in high school, he had been saying he wanted to build his career in the fashion industry.” Okiyo Suzuki, 85, an artist in Minami Ward who belonged to the same art club with Mr. Miyake in high school, recalled memories that he had been very enthusiastic and given advice to other members for improvement after he had looked at their work.

In 1990, he was awarded the first Hiroshima Art Prize. He spoke then about how clothing work couldn’t be done without the celebration of humanity and nature, and added that a mind wishing for peace underlay his creation. His mother had severe burns at the time of the atomic bombing and passed away less than three years later. He also witnessed the flash of the atomic bomb at age of seven.

Yuso Takezawa, 78, resident of Asaminami Ward and former vice director of Hiroshima City Museum of Contemporary Art, who worked together with Mr. Miyake when completing his exhibition at the museum, surmised his feelings, and said, “While the A-bomb survivors suffered from keloids, I think he tried to create a beautiful second skin through his work.” Showing respect for him, Mr. Takezawa continued, “He was like a conductor who could involve others and make a great achievement. He gave intensive energy to us.”

Tadao Ando, 80, an architect who had been a friend of his for five decades, talked with him over the phone only a half month ago. Mr. Ando had the experience of having attended a meeting together with Mr. Miyake as an expert for proposing a strategy on use of the former Hiroshima Branch of the Bank of Japan building. He looked back at that time, and said, “Mr. Miyake was looking ahead and trying to convey a new culture on top of the traditional Hiroshima. Artists all round the world wanted to see him.” They got along with Isamu Noguchi, a sculptor, and three of them frequently had a chat. Mr. Ando mourned his death, by saying, “I feel like an empty hole is created in the Japanese art world. I really miss him.”

Mr. Miyake put his wish for peace into design work. He crossed the river of death on August 5, a day prior to the 77th anniversary of the atomic bombing.