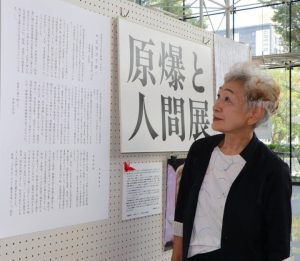 Emiko Honma, 72, resident in Matsue, Shimane Prefecture, assumed the chair of the Shimane prefectural A-bomb survivors’ group as a second-generation A-bomb survivor for the first time. The group consists of those who experienced the atomic bombing either in Hiroshima or Nagasaki. While A-bomb survivors’ groups are disbanding throughout Japan due to members’ advancing age and other reasons, Ms. Honma has argued a need to maintain her group, by saying, “A-bomb survivors need to have a source of emotional support as long as even one A-bomb survivor is still fine.”

Ms. Honma’s mother, Atsu, who was exposed to residual radiation when she entered Hiroshima city in the aftermath of the bombing, and died at age of 90 in 2013, never shared her experience of the time with her. Every year, around 8:15 a.m. on August 6, Atsu asked Ms. Honma to turn off the television. When asked why, she replied, “I don’t want to recall anything.” After the death of her mother, Ms. Honma visited Hiroshima and looked into her address back then and other information based on her Atomic Bomb Survivor’s Certificate.

At the request of Yoshio Hara, 95, the group’s former chair, Ms. Honma took over the post of chair from him. She wondered if it was good to accept the role as being from the generation who didn’t know the atomic bombing firsthand, but the international community’s response to nuclear weapon issues caught her attention, such as the summit meeting of the G7 (Group of Seven industrialized nations) scheduled to take place in Hiroshima next year, amid Russia’s invasion of Ukraine. Then, she determined to take over the group’s head because she thought the A-bomb survivors’ group in the prefecture shouldn’t disappear when people all over the world believe they would work hard from now to realize a peaceful world.

The average age of A-bomb survivors in Shimane is 90.06 with relentless progress of aging underway. The concern is how their experiences can be passed down to later generations. Her group has continued to explore appropriate activities, such as providing transportation support for survivors who speak about their A-bombing experiences at schools, or recitation of survivors’ personal notes. Regarding the “Message to Connect to Future” program, which the group began last year to collect the members’ notes on their A-bombing experience, she has considered an option to visit the survivors for interviews, as she believes some of them may be hesitant to write their stories by themselves.

On August 6, an A-bomb victim memorial service and the panel exhibition were held in Matsue. The A-bomb survivor’s group in Masuda, Shimane prefecture that had been dissolved four years ago, also took part in the event. “I want to gather what A-bomb survivors think as their expectation for peace or their opposition to war, and give shape to them.” She was reassured in her resolution through dialogue with the survivors who came all the way to deliver their message.