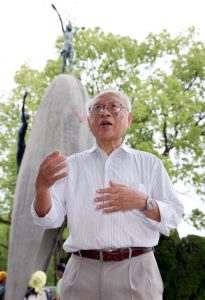 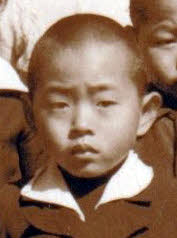 Masahiro Mimura, 76, representative of the Association of Counselors for Hibakusha and an in-utero A-bomb survivor who experienced the atomic bombing in his mother’s womb, only became conscious of his status as an A-bomb survivor in 1960 after both his parents had died. His life as a so-called ‘A-bomb orphan’ began when he was in his third year of junior high school.

In 1945, Shigeo, his father, and Chiseko, his mother, were living in Aki-gun county’s village of Nukushina (now part of Hiroshima’s Higashi Ward), approximately seven kilometers from the hypocenter, together with their oldest son, who was nine years old at the time. On August 6, Shigeo was on the way home from his workplace in the part of Hiroshima City known as Ujina (now part of the city’s Minami Ward) when he experienced the atomic bombing at a spot near Kojin Bridge, about two kilometers from the hypocenter. He returned home with burns on his back.

The following day, August 7, the Mimura family left their home for the home of Chiseko’s parents in the Koi area (now part of Hiroshima’s Nishi Ward) to bring food and try to confirm the well-being of the family. That was when they were exposed to radiation from the atomic bombing. Chiseko, eight months pregnant, fell ill when they neared Kojin Bridge, the place where Shigeo had experienced the bombing, probably because of the emotional trauma she suffered after viewing the unspeakably horrible scenes. They returned home that day, but entered the city once again on August 13, headed for the Koi area.

The fetus Chiseko was carrying at the time happened to be Mr. Mimura, although he had no way of understanding the surrounding circumstances. He later learned about the reality from notations on the applications for Atomic Bomb Survivor’s Certificates that his brother had submitted.

In the spring of his third year at junior high school, a series of happenings forced Mr. Mimura to gain consciousness about the atomic bombing. In April of that year, first, his mother was hospitalized at the Hiroshima Red Cross Hospital. In May, his father was admitted to the Atomic-bomb Survivors Hospital (the two hospitals have now merged into the Hiroshima Red Cross Hospital & Atomic-bomb Survivors Hospital). Both of his parents were suffering from cancer. Shigeo died in June, and Chiseko became bedridden. While attending school, Mr. Mimura together with his aunt took turns staying overnight in the hospital room to take care of Chiseko. Despite that, however, in November, his mother also died.

He suddenly had become an orphan at the age of 15. Because his brother was harried with his own work, Mr. Mimura had to take care of all the household chores. He could not go to school regularly or concentrate on his entrance-exam preparations. He became frustrated and overwhelmed by a sense of despair. “I felt empty and full of regret…,” he said haltingly, as he recalled the situation.

Mr. Mimura became engaged in peace activities conducted by the Hiroshima Paper Crane Club, a group made up of junior high and high school students. Such activities were an effective way for him to take his mind off things during the time he was taking care of his mother. He learned of the club when the family had visited his father in the hospital to lift his spirits, at which time Ichiro Kawamoto, manager of the club, invited him to join in its activities. In August 1960, he participated in the World Conference against Atomic and Hydrogen Bombs, held in Tokyo, carrying a photograph of his late father and raising his voice in opposition to nuclear weapons. He became deeply involved in the club’s activities in what seems to have been an attempt to escape from his own reality. He also took part in meetings of a group formed by a professor at Hiroshima University designed to support A-bomb orphans in Hiroshima City.

Mr. Mimura went to high school and university on scholarships. He became interested in the field of social welfare from his experience of being supported by so many people, and went on to study at Nihon Fukushi University, located in Aichi Prefecture. Although there was a period of time during which he felt embittered about losing his parents at such an early age, he said, “I realized I was blessed with many people who had helped me out.”

After graduation from university, he found a social worker job at a hospital in Hiroshima assisting A-bomb survivors through the work of listening to their problems and providing support and advice. In 1981, he and some friends formed the Association of Counselors for Hibakusha, for which he now serves as representative, to protect the livelihoods and rights of A-bomb survivors. The association continues to create opportunities for survivors to share their A-bombing experiences and encourage them to write their own histories for posterity. The group also provides behind-the-scenes support to A-bomb survivors such as those living overseas when they file lawsuits against Japan’s government for redress, such as class-action lawsuits over recognition of diseases caused by the atomic bombing.

As the number of A-bomb survivors dwindles over time, Mr. Mimura organized a group of in-utero survivors in 2014 to share their experiences and pass on their stories to future generations. While looking back on the trajectory of his own life, he is determined to “work until all nuclear weapons are eliminated.”