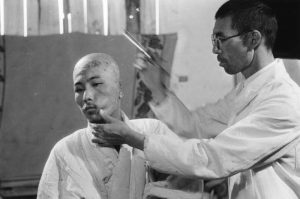 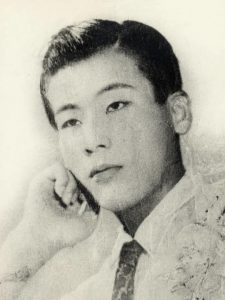 In October 1945, two months after the atomic bombing, a photographer by the name of Shunkichi Kikuchi, who died in 1990 at the age of 74, visited Hiroshima City as a member of a production team for an A-bomb documentary film shot in conjunction with survey work carried out by specialists of the devastation caused by the atomic bombing and took photographs of numerous A-bomb victims. Now, amid mounting concern about Russia’s possible use of nuclear weapons after that country’s invasion of Ukraine, the horrific reality documented in the photos communicate what people would face were the weapons to be used again. Herein, we will zero in on the experiences and feelings of the victims portrayed in photos based on their personal accounts, testimonies, and the stories told by their surviving family members.

On brink of death after losing both ears and hair

Mr. Kikuchi described a patient in the Hiroshima Red Cross Hospital (now located in Hiroshima’s Naka Ward) as having “miraculously survived.” Mr. Kikuchi took photos of the patient, Eiichi Sakogoshi, then 21 years old, who had lost most of both ears except the lobes due to severe burns. He lost most of his hearing and suffered from hair loss, diarrhea, fever, and subcutaneous hemorrhaging, the results of exposure to radiation from the atomic bombing.

“He had a scar from a piece of iron that had stuck in his head. It had created a dent large enough for us to place our fingers inside,” said Kimiko Tsutsui, 62, Mr. Sakogoshi’s oldest daughter who lives in Kure City, conveying the horrific experiences she had heard from her father while he was still alive. “He told me he had nearly been cremated with other bodies.” She also has in storage the personal accounts that her father put down on paper 29 years after the atomic bombing.

According to his accounts and other materials, during the war Mr. Sakogoshi, a medic at the Hiroshima Second Army Hospital in Motomachi (now part of the city’s Naka Ward) who lived in military barracks, was charged with the work of carrying communications to other military facilities inside the city limits of Hiroshima. He was looking forward to finishing his work early that day and seeing his mother, Haya, who was living in the area of Kawaramachi (now part of Hiroshima’s Naka Ward).

On that morning of August 6, 1945, he was attending the hospital’s morning assembly in an open square at the facility about one kilometer from the hypocenter. “It was as if a flash of yellow light covered the earth,” he wrote in his account of that time. The military uniform he was wearing became engulfed in flames, so he rolled around on the ground to put out the fire on his back. The hospital had been reduced to a pile of rubble.

“The skin on my face peeled right off, my head became dry and rough due to burns, and something had pierced my head,” he wrote in his account of that time. When he shook his head, blood ran down his burned body. In intolerable pain, he fled into the mountains in the area of Ushita-cho (now part of Hiroshima’s Higashi Ward). Once there, he temporarily lost consciousness.

Later, managing to return to the incinerated site of his mother’s home, he was unable to confirm whether or not she was alive. Unable to search for his mother because of his severe wounds, he simply stayed put there for several days, staving off hunger by eating sweet bread passersby gave to him. On August 21, he was taken to the Red Cross Hospital on a stretcher thanks to a nurse who had been passing by.

He wrote in his personal account that the piece of iron ultimately removed from his head measured a few centimeters in length. “I think I was hovering between life and death for a few months,” he said in his account. After being discharged from the hospital at the end of 1945, he traveled on crutches to Kurahashijima Island (now part of Kure City), where his relatives were living, and there learned that his mother had died in the atomic bombing.

Although he was unwell even after that, he was able to recuperate a short while after his marriage in 1958. He set out to work at a garbage disposal facility, among other places, in Kure City, raising one son and two daughters.

Mr. Sakogoshi’s son, Motoyuki, 59, a resident of Kure City, and youngest daughter, Akiko Kawano, 57, a resident of Hiroshima’s Saeki Ward, participated in an interview with us and shared memories of their father. According to them, he paid attention to fashion, liked movies and coffee, and proudly spoke about his experience of surviving the atomic bombing. All of his children said they “never felt ashamed” when their childhood friends asked why their father did not have ears.

People finally came to know Mr. Sakogoshi as the man portrayed in Mr. Kikuchi’s photos in 1968, 23 years after the bombing, when an A-bomb documentary film shot in Hiroshima and Nagasaki was returned from the United States and released in Japan. He announced himself to be one of the people in photos that were released along with the film. The Chugoku Shimbun carried a story on Mr. Sakogoshi with a photo of him operating a power shovel in the garbage disposal facility, in its evening edition of the newspaper dated August 1 of that year.

“The fear of the atomic bomb grew quite naturally,” said Ms. Kawano. Motoyuki said that he hopes “the A-bombed nation of Japan takes the lead in realizing a world free of nuclear weapons.”

With the aim of having people understand the horror of the atomic bombing, the three children showed us photos of Mr. Sakogoshi, their father, taken before the bombing. One photo clearly shows the original shape of his ears. Mr. Sakogoshi himself said in an interview in 1968, “For my children, no more war; no more A-bombings.”