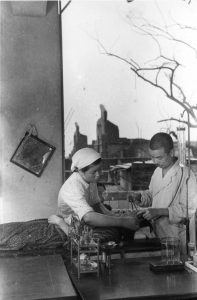 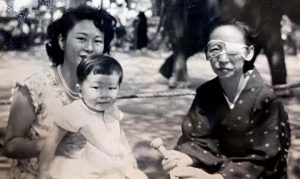 The Hiroshima Teishin Hospital, located in the city’s Naka Ward, still holds on to its A-bombed outpatient wing. The structure, about 1.3 kilometers northeast from the hypocenter, withstood the fires that arose immediately after the atomic bombing and was used to provide first-aid to victims starting the day of the bombing, August 6, 1945. The late photographer Shunkichi Kikuchi visited the hospital wing on October 8, 1945, and took photographs of a woman who was undergoing treatment on one of her eyes.

The patient’s name was Hisa Matsushita, then 48 years of age. After a shard of glass blown by the A-bomb blast had pierced her left eye, she underwent surgery the next month, September, to remove the eye itself. According to a note left by Mr. Kikuchi, “She hadn’t made satisfactory progress.” She also suffered other wounds from glass shards—under her left ear and in her shoulders and back—and at one time experienced a significant decrease in white blood-cell count from exposure to radiation from the atomic bombing.

Who was Hisa? Through investigative work, this writer managed to locate Ichiro Ando, 70, Hisa’s grandson who lives in Toyonaka City in Osaka Prefecture. On my visit to his home, he showed me a photo of Hisa and Mr. Ando in early childhood. “The woman wearing the eyepatch is my grandmother,” said Mr. Ando.

Mr. Ando is the oldest son of Hisa’s third daughter, Ai, 92, a resident of Suita City in Osaka Prefecture. Hisa had two sons and four daughters. Based on Ai’s personal accounts and some pre-war materials, Hisa and her family’s whereabouts and movements have come into focus.

Hisa was originally from Toyama Prefecture. About ten years before the atomic bombing, when her husband Muneyoshi Matsushita, a Western-style painter also from Toyama, took a job as an art teacher at Hiroshima Jogakuin Senior High School, the family moved to Hiroshima City. Muneyoshi repeatedly held exhibits of his paintings at different venues in Hiroshima such as the Hiroshima Prefectural Industrial Promotion Hall (now the A-bomb Dome, located in the city’s Naka Ward).

Rose plant at home is keepsake of her daughters

On August 6, 1945, her oldest son of the two boys and four girls, then aged 12 through 27, was stationed in an Army unit outside of Hiroshima Prefecture. Ai and Muneyoshi, starting the day before, had set off to visit relatives living in what is now known as Etajima City. When the atomic bomb detonated in the sky, Hisa, her second son, and three daughters were in Hiroshima City.

Hisa is said to have been in the bathroom of her home in the area of Noboricho (now part of Hiroshima’s Naka Ward), about 1.1 kilometers from the hypocenter. Shards of glass pierced her body in numerous places, leaving her to fall down, covered in blood, on the floor. She was rescued by her second son, who was also home at the time.

Two of Hisa’s daughters died in the bombing. Her second daughter could not be saved after she was trapped under the beams of her home. Her youngest daughter, who was then a first-year student at a girls’ school, was killed while being mobilized to help dismantle buildings for the creation of fire lanes in the city.

Despite suffering intense pain in her left eye, which she eventually lost, Hisa survived. The following year, she and the remaining family returned to their home of Toyama. After they found new buds on a rose plant once thought to have died in their yard in Hiroshima, they brought the plant to Toyama and replanted it.

Mr. Ando explained the, “Rose plant was a keepsake of her two daughters that died in the bombing.” When the transplanted rose plant bloomed, Muneyoshi painted an image of the roses in a Western style. In Toyama, Muneyoshi served as the principal of a junior high school and brought attention to his students of the importance of peace. However, in 1954, he fell ill and died at the age of 56. He had avoided the A-bomb blast and thermal rays on the day of the atomic bombing because he happened to be outside of Hiroshima, but he had returned to the city the same day and was exposed to A-bomb radiation.

After her husband’s death, what Hisa looked most forward to was meeting her grandchildren living in different places. In 1968, when Mr. Kikuchi’s photos were covered for the first time in the media, she announced that she was the woman in the photo at the hospital. She suffered from liver disease in her later years and died in 1982 at the age of 85. According to an acquaintance’s eulogy, Hisa used to repeat the phrase, “No more war.”

Six years ago, Ai, the only child still alive among Hisa’s six children, compiled a memoir of her A-bombing experience with the help of Mr. Ando’s wife, Minako, 63. Along with her father, Ai entered the destroyed Hiroshima City when she was 15 years old. She wrote in her memoir that, “As long as we accept the presence of nuclear weapons, the risk of worldwide destruction at some time in the future is a given.”

Mr. Ando has on display in his own home Muneyoshi’s painting of the roses that were keepsakes of his daughters. Mr. Ando and Minako now work as guides for overseas tourists and have come to realize that many visitors to Osaka also travel to Hiroshima. The couple has begun to think about “communicating the story of Hiroshima and our family’s experiences in the atomic bombing as guides” to the Osaka travelers during their tours of that city.