Striving to fill voids in Hiroshima, evidence of victims remains—A-bomb victims in photos, Part 3: Mother and child at relief station 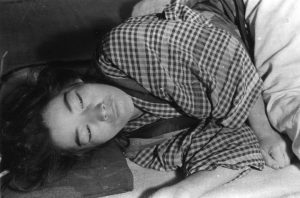 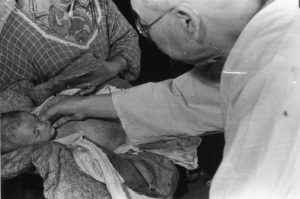 Regrets of family who believed their loved ones would recover
by Kyosuke Mizukawa, Senior Staff Writer

Around October 11, 1945, the late photographer Shunkichi Kikuchi took photographs at a relief station set up in the Oshiba National School (now Oshiba Elementary School in Hiroshima’s Nishi Ward) that admitted patients in one of the school’s wood-paneled classrooms. In one photo, a severely ill mother, with her daughter, lied down in a room originally used for science classes.

According to Mr. Kikuchi’s notes, the mother was Yone Takeuchi, 31, and the daughter, Yo, 12. They experienced the atomic bombing at their home in the area of Funairi-machi (now part of Hiroshima’s Naka Ward). The mother had appeared to be uninjured and initially was taking care of her daughter, whose legs were seriously injured by a refrigerator that had fallen on her. About one month later, however, the mother’s health deteriorated, and she experienced such symptoms as purple spots and bleeding gums. She was hospitalized on September 18.

Mother dies soon after being photographed

“Although she didn’t have any external wounds, she suddenly developed ‘A-bomb disease,’ which horrified me.” That description appeared in Mr. Kikuchi’s personal notes, which were collected and published in the book “Genbaku wo totta otoko tachi” (in English, Men who photographed the atomic bombing). The mother had trouble breathing and passed away on October 14, shortly after she was photographed by Mr. Kikuchi. Her daughter, who also suffered from symptoms of radiation sickness, including hair loss and diarrhea, died the next month, following the death of her mother.

The photo of the mother and daughter is displayed at the Hiroshima Peace Memorial Museum, located in the city’s Naka Ward, and conveys the suffering caused by use of nuclear weapons. How did the surviving family handle the loss? This writer went about searching for members of the surviving family.

The name of the daughter’s older brother was known to be Nobuyuki Takeuchi. Looking into old phonebooks and other information, it was found he had died at the age of 63 in 1996.

I then searched for personal notes written by the A-bomb victims’ family, but none was ever found. Nevertheless, the RCC Broadcasting Company happened to have archived a video of an interview with Nobuyuki. The interview was recorded in 1995, one year before his death. He was living alone in Hiroshima at the time. In the interview, he conveyed the following information in a halting voice.

His mother’s formal name was Yoneko, and his sister’s name was Yoko. His mother worked as a waitress and the three were living together. Nobuyuki, then 13, experienced the atomic bombing at a location where he had been mobilized to work as a junior high school student. When his mother was admitted to the medical facility, he stayed at her bedside. In the beginning, he believed she would recover.

However, one night in her delirium, his mother said, “The ship has arrived. I can see mandarin orange trees bearing fruit.” She died the following day. Then his younger sister died, and Noboyuki found himself alone. He quit school and survived by selling vegetables on the roadside. He remarked in the video’s interview, “It was really miserable.”

Some survivors in photos remain unidentified

As Mr. Kikuchi was taking photos in Hiroshima in October of 1945, a documentary movie was also being filmed in parallel with his photography work. Starting in 1994, RCC spent three years searching for and interviewing the individuals appearing in the documentary and their family members. In 1996, it broadcast a 4.5-hour television program titled “Shodo no Carte” (in English, Clinical records from the scorched earth). The program, in which Mr. Takeuchi also appeared, contained comments that proved valuable in analyzing Mr. Kikuchi’s photos. Amid the escalating concern of nuclear weapons’ use due to Russia’s invasion of Ukraine, the company will rebroadcast the program at midnight over the three nights of August 5–7th.

However, some of the A-bomb survivors appearing in the movie and Mr. Kikuchi’s photos have yet to be identified.

One of Mr. Kikuchi’s photos taken at the relief station in the Oshiba National School shows a physician attending a naked infant. According to a note made by the documentary movie’s staff, the infant’s condition suddenly changed for the worse, and after being taken to the relief station, the baby was found to be dead. Details about the child are unknown, including its name.

The physician in the photo has been identified as the late Goro Nagasaki. When this writer visited Mr. Nagasaki’s grandson, Kotaro, 70, current director of the Nagasaki Hospital, located in Hiroshima’s Nishi Ward, he showed me numerous materials concerning his grandfather to read, but no information related to the child in the photo was available.

The photo provides evidence that the atomic bombing continued to take the lives of even small children two months later. Meanwhile, exactly who died and how the surviving family members felt about the death of their loved ones is unclear. Clearly, unfilled “voids” remain.