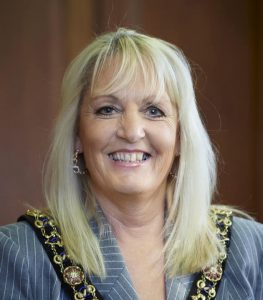 Manchester was the world’s first city to declare itself ‘nuclear free’ on 5 November 1980. The city’s declaration prompted a wave of similar declarations by British towns and cities also opposed to the UK Government’s futile civil defence preparations and its acceptance of the validity of waging nuclear war as military policy.

In 1982, these local authorities came together as the UK/Ireland Nuclear Free Local Authorities and the Secretariat of this body remains with Manchester City Council. Like Mayors for Peace, the NFLA is a member of the ICAN coalition.

Manchester also initiated the formation of a UK/Ireland Chapter which now has almost 100 member towns and cities, and the Secretariat of this body also resides with Manchester City Council. Over the last three years, Manchester has also played a leading role in the creation of a new European Chapter and holds the Vice-Chair.

Manchester was the first city in the UK to pass a resolution calling on the UK Government to abandon its replacement of the submarine-based Trident nuclear arsenal and to sign and ratify the UN Treaty on the Prohibition of Nuclear Weapons. The city’s example has subsequently been followed by other UK local authorities.

In February 2022, Manchester hosted a high-level international seminar to highlight the injustice shown to former British nuclear test veterans, who have still not received recognition and compensation for their suffering, and that of their families, by successive UK Governments. The Lord Mayor opened the seminar. In this 70th year of the first UK atomic bomb test, Manchester continues to offer test veterans its support.

2. At a time when Russia continues its invasion of Ukraine and even suggests the use of nuclear weapons, how do you see the significance and role of Mayors for Peace, where cities around the world come together in solidarity?

Through membership of the Mayors for Peace European Chapter, Manchester has acted with other European member cities to clearly condemn the Russian invasion of Ukraine and actively encourage a cessation to current hostilities in Ukraine; to support Ukrainian refugees and humanitarian aid efforts; and to collectively work for peace and international co-operation in the future.

At this time, City residents, working with Council officials and voluntary agencies in partnership, are providing a warm welcome and practical support to Ukrainian refugees finding safety and shelter in the city.

Manchester, with other European cities, has – in joint statements - expressed its opposition to the Russian invasion of Ukraine. During this difficult time, links between the European Chapter and Russian member cities are impossible, and Manchester’s own link with St Petersburg is temporarily suspended.

Mayors for Peace cities have to promote the clear message that ‘cities are not targets’ and that it is immoral and repugnant to base any nation’s defence policy upon the deployment of weapons of mass destruction designed specifically to kill large numbers of innocent civilians and to decimate the civilian infrastructure of a supposedly ‘enemy country’; put simply nuclear weapons are ‘citizen and city killers’. Nor is this logical as such action would invite retaliatory strikes that would be calamitous to the aggressor.

Mayors for Peace cities must campaign on the urgent need to eliminate nuclear weapons and to devote the resources instead to tackling the real human security issues we all face, such as future mass pandemics; climate change; terrorism and extremism etc and we must work to establish new international norms where states work co-operatively to address issues of common concern.

3. How do you evaluate the Treaty on Prohibition of Nuclear Weapons? What efforts has your city made toward the ratification of TPNW by your country?

We believe that the TPNW represents the only real opportunity for nations collectively to work together to bring about multilateral nuclear disarmament. We are especially excited that the treaty has been brought about through the active participation of world civil society and that Mayors for Peace has been a major player in that effort.

Mayors for Peace cities in nations possessing a nuclear arsenal are beholden to work for the elimination of that arsenal. Manchester was the first city in the UK to pass a resolution calling on the UK Government to abandon its replacement of the submarine-based Trident nuclear arsenal and to sign and ratify the UN Treaty on the Prohibition of Nuclear Weapons. The city’s example has subsequently been followed by other UK local authorities.