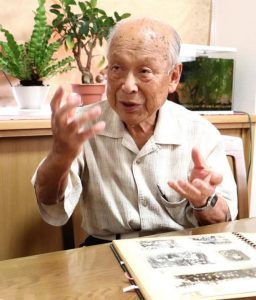 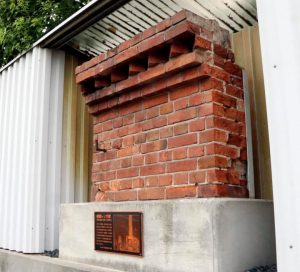 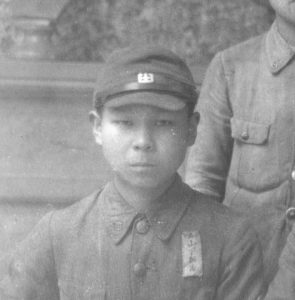 Told to his granddaughter, the junior writer, about his experience of A-bombing
by Rina Yuasa, Staff Writer

Takuji Yamashita, 92, lost his younger sister and brother, who were still very young, to the atomic bombing. As it was so painful for him just to recall them, he has sealed that memory in his mind until now. Mr. Yamashita made up his mind to convey and pass on his experience to his grandchildren, including Yuko Yamashita, 13, a second-year junior high school student acting as the Chugoku Shimbun’s junior writer, and look back on what happened to him on that day.

He lived with his parents, two brothers, and a sister in Funakoshi-cho (now part of Aki Ward). He was then 15, and a third-year student at Sanyo Junior High School (present-day Sanyo High School). He was mobilized to the Kirihara Container Factory located in Funairikawaguchi-machi (now part of Naka Ward) to work on the production of barrels used to fill gunpowder.

On August 6, he had been working at the factory since morning. When a senior worker and he entered the wooden warehouse to look for parts necessary to make a barrel, the ceiling suddenly fell down on them. As an iron table was placed upside-down near them, its legs stopped the ceiling’s beam from dropping to the ground and crushing the two beneath it.

The factory was located about 2.4 kilometers away from the hypocenter. When he got out of the collapsed warehouse, he found many students had fallen to the ground. A stream of people with their clothes or skin burned walked from the direction of the city’s central area. Some of them asked for water, entered the river running in front of his factory, and were washed away by the current.

After his teacher ordered the students to disband, Mr. Yamashita headed home. Avoiding the urban area on fire, he walked along the railway track of the Sanyo Line, and arrived at his home in the evening. Though the window glass was broken, his father Iwamatsu, then 47, and younger brother Chisato, 14, were safe.

However, his stepmother Masayo, who was then 32, younger sister Mutsuko, 5, and other younger brother Hiroshi, 2, suffered severe burns over their entire bodies. They had gone to the city area to join the work of dismantling buildings to create fire lanes, and experienced the atomic bombing near Tsurumi Bridge (now part of Naka Ward) located about 1.7 kilometers from the hypocenter.

Mr. Yamashita struggled to take care of them. There were no medicines to cure burns available, so he soaked pieces of gauze in food oil, and put them onto the wounds. Every time pieces of gauze on the wounds were replaced with new ones, their flesh came off at the same time. He said, “It was very intolerable because they looked to be so much in pain.” As the wounds stank so badly, Iwamatsu, who was taking care of them with him, collapsed again and again. On August 15, the day the war ended, Mutsuko passed away. Six days later, Hiroshi died, too.

Mr. Yamashita carried a coffin containing their bodies on his back and took it to the cremation site set up at a mountain behind their home. However, as there were so many bodies of other victims had been brought to the crematory, he couldn’t use the site. He instead dug a hole in the ground and burnt their bodies in the hole all night. The bodies of his younger brother and sister shrunk or moved in flames. He said, “I can never forget the sadness of burning my loved ones’ bodies by myself.”

According to the Record of the Hiroshima A-bomb War Disaster, wounded victims were brought to Funakoshi-cho, about seven kilometers from the hypocenter, one after another. When they died, their bodies were cremated at the bank of Seno River. From the morning of August 6, there were many local residents in the area who went to the urban area to work or collect timber materials from the demolished houses to create fire lanes.

Mr. Yamashita also helped cremating residents who had died. As its smoke reached his home, he felt nauseous many times. Firewood was in short supply in those days. When he went searching for some, he found a stray dog clutching the unburnt piece of a body in its mouth. The horrible scene he witnessed is still branded in his memory.

After the war, he continued to go to school while attending to Masayo, and cultivate sweet potatoes by reclaiming the mountain behind his home after school. He graduated from Hiroshima Technical Institute (now Hiroshima University’s Faculty of Engineering), and got a job at Toyo Kogyo (now, Mazda Motor Corporation). He worked in a department that created drawings for automobile parts. Masayo lived until 98 years old.

Mr. Yamashita never shared his experience with anyone, including his family, until now. His granddaughter Yuko gave him a chance to speak up finally. He was moved by her passion to keep on serving as a junior writer in the hope that she wanted to interview A-bomb survivors and convey a message of peace. He laid his hopes on her, saying, “By possessing not a nuclear weapon but a pen, I would like young people like Yuko, who will shoulder the responsibilities of future world, to make an appeal of peace and save the peaceful world.”