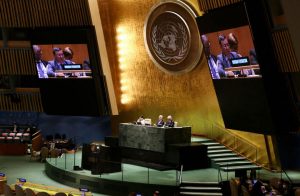 The Nuclear Non-Proliferation Treaty (NPT) Review Conference was held for the first time in seven years during the period August 1–26 at the United Nations headquarters in New York City. And, for the second time in a row, the conference suffered a breakdown after it failed to adopt a final document designed to elaborate policies concerning nuclear disarmament and non-proliferation. Amid the increased risk of nuclear weapons’ use with Russia’s invasion of Ukraine, that aggression appears to have hampered achievement of a consensus at the conference. But conflict regarding nuclear disarmament also repeated itself between nuclear weapons nations and their non-nuclear nation counterparts. Will the international community be able to make progress toward “a world free from nuclear weapons,” a goal desired by people in the A-bombed cities? The Chugoku Shimbun will take a look back at the four weeks of conference negotiations and offer our take on prospects for the future.

At the conference plenary session on August 26, the proposed final document was not adopted due to Russia’s opposition. At the session, a French representative began to deliver a joint statement from more than 50 nations including the United States, the United Kingdom, and Japan condemning Russia’s invasion and threat of use of nuclear weapons. “The ongoing war of aggression of the Russian Federation against Ukraine remains a major concern for every state party to the Treaty on the Non-Proliferation of Nuclear Weapons,” said the representative as delegation members from Russia departed the assembly hall one by one in an act of protest. On the final day of the conference, that situation put into relief the divide that exists among the five nuclear superpowers.

U.S. and Russia had no dialogue

From the onset, Russia’s invasion of Ukraine directly affected the conference. During the general deliberative session held the first week, nations including the United States, the United Kingdom, and France denounced Russia’s acts of aggression against Ukraine, including its threat of nuclear force and occupation of the Zaporizhzhia nuclear power plant, located in southern Ukraine. The same went for the main committee’s deliberations, with Russia continuing to push back against the criticism.

The conference traditionally has centered on conflict between nuclear-armed nations and non-nuclear nations, which have been dissatisfied with the stagnation in progress toward nuclear disarmament. The world’s five nuclear superpowers had been aligned at a certain level, but one diplomatic source confided, “This time, there was no dialogue between the United States and Russia.” Another diplomatic source described the difficulty in forming a consensus. “Since a new agenda item undiscussed to that point had arisen, a divide arose in the stances of the countries involved,” said the source.

Distancing itself from the conflict among the United States, the United Kingdom, France, and Russia, which has grown ever harsher in keeping with the current international situation, China forcefully argued its own stance. China insisted that the security framework among Australia, the UK, and the U.S. known as AUKUS, which promotes the introduction of nuclear-powered submarine technology to Australia, was in violation of the NPT’s goals. With AUKUS in mind, China forcibly included the idea in the draft final document that naval nuclear propulsion is of “interest among states parties to the treaty.” Meanwhile, it was successful in eliminating from the draft document statements seeking a temporary halt to fissile material production, because such a moratorium would prevent China from building up its own nuclear capabilities.

The proposed no-first-use declaration by nuclear nations was deleted, and the establishment of numeric goals and deadlines for nuclear disarmament was put off. Regarding the stagnation in nuclear disarmament efforts as indicated by the watered-down contents of the draft final document, Beatrice Fihn, executive director of the International Campaign to Abolish Nuclear Weapons (ICAN), proclaimed “Russia’s invasion of Ukraine is being used as an excuse.” ICAN is the non-governmental organization (NGO) that vigorously promoted the Treaty on the Prohibition of Nuclear Weapons (TPNW).

Eventually, around noon on August 26, Russia urged the conference chair Gustavo Zlauvinen, from Argentina, to revise the text of the draft final document but refused to agree with the draft, arguing that the five changes it requested had not been made. According to multiple diplomatic sources, those items were assumed to have been related to the Zaporizhzhia nuclear power plant and other nuclear facilities in Ukraine, as well as the Budapest memorandum on security alliances concluded in 1994 by which Ukraine security was guaranteed by the United States, the United Kingdom, and Russia in exchange for Ukraine’s relinquishing its own nuclear weapons.

Mr. Zlauvinen and the states parties worked to reach consensus at the conference by making repeated compromises for the draft document. That was because the parties shared an awareness that a breakdown of the second conference in a row should be avoided in order to sustain the NPT framework, which serves as the foundation of nuclear disarmament and non-proliferation. As of the morning on August 26 at least, momentum to reach a consensus was still in evidence.

At a press conference held at midnight Japan time on August 26, Mr. Zlauvinen said, “Filming a movie for four weeks but not taking a commemorative photo at the end does not mean the movie doesn’t exist,” his voice giving away his frustration and fatigue.