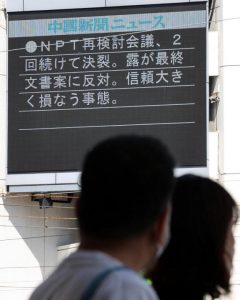 The Nuclear Non-Proliferation Treaty (NPT) Review Conference, which was held at the United Nations (UN) headquarters in New York City starting on August 1, ended in failure without adoption of a final document. On August 27, A-bomb survivors and members of citizens groups in Hiroshima calling for the abolition of nuclear weapons expressed their disappointment and indignation in response to the news. They pledged further appeals and action to achieve the goal of abolishing nuclear weapons, a long-held wish of the A-bombed cities.

The review conference was convened amid Russia’s ongoing invasion of Ukraine. Toshiyuki Mimaki, 80, chair of the Hiroshima Prefectural Confederation of A-bomb Sufferers Organizations (Hiroshima Hidankyo), expressed his disappointment. “It was expected that reaching an agreement would be difficult, but the news is still disappointing.” The review conference failed to adopt a final document for the second meeting in a row, resulting in strengthened headwinds against progress toward nuclear disarmament. With regret, Mr. Mimaki said, “The most frightening thing in the world are nuclear weapons, so why isn’t there any debate about abolishing them? If the situation continues, humanity will suffer.”

The conference broke down over a statement involving the Russian-occupied Zaporizhzhia nuclear power plant, located in southern Ukraine. Kunihiko Sakuma, 77, chair of the other Hiroshima Hidankyo said, “This was supposed to be a forum for discussing nuclear disarmament, but that turned out not to be the case. I simply can’t believe it.” Mr. Sakuma had traveled to the United States on a schedule that coincided with the conference dates and provided his testimony about the atomic bombing at a local meeting. “The wishes of the A-bomb survivors for the abolition of nuclear weapons have been ignored. I had hoped the Japanese government would play a more active role in moving toward the goal of the abolition of nuclear weapons.”

As if to carry on the hopes of the aging A-bomb survivors, younger people also sent out messages at the conference. Yuta Takahashi, 21, a senior at Keio University, is originally from Fukuyama City and serves as co-chair of Know Nukes Tokyo, a group of young people working to abolish nuclear weapons. He participated in the conference as a representative of non-governmental organizations (NGO) and exchanged views with other young people from countries across the world. He expressed his own hope for the future when he said, “More than the failure to adopt a final document, there is a sense of crisis in the fact that the divide among member countries seems to have deepened in the process of discussions. However, we want to create a movement in which people of the same generation can work together to get politicians involved in nuclear abolition.”

Akira Kawasaki, 53, a member of the ICAN international steering committee, criticized the actions of nuclear weapons states while alluding to Russia’s responsibility in opposing the final document. “The arrogance of other nuclear weapons states was also conspicuous, such as in their deletion from the document of the statement about the no-first-use policy regarding nuclear weapons. It became clear that the NPT alone cannot achieve nuclear abolition,” said Mr. Kawasaki. He then mentioned the need to increase the number of signatory nations to the TPNW and said, “We need to create overwhelming international public opinion against nuclear weapons.”