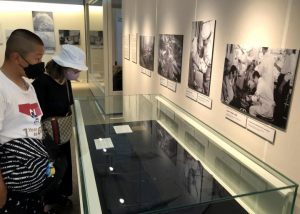 The special exhibition “The Atomic Bombing and Medical Care,” which introduces several activities, including rescue operations immediately after the atomic bombing, is being held on the first floor of the east building of the Hiroshima Peace Memorial Museum, located in the city’s Naka Ward. About 140 medical records and photos from the time convey how doctors and nurses worked to treat A-bomb survivors, while suffering from their own wounds. The exhibition is scheduled to continue through September 12. Admission is free.

The exhibition consists of four parts, including the “Medical System in Wartime” and “Rescue Operations in Chaos.” The exhibition shows how the medical system collapsed after many of the doctors and nurses who were kept on standby in the city in preparation for air raids were exposed to the A-bombing. It also features photos showing doctors who still provided medical treatment at first-aid stations and other places, as well as hand-written medical records left behind by doctors at the time.

The late Sukeharu Iwasaki, then 42, a doctor of the Hataka Hospital (located in what is now Aki Ward), which was run by the Japanese Medical Group, recorded the symptoms that appeared in the wounded about a month after the bombing. In the section on hair loss, he wrote, “It started to present itself about two weeks after the bombing,” and an image of a doctor facing unknown symptoms without knowing what they were comes to mind.

Fuminori Ogami, 65, a part-time high school teacher living in the city of Sanyo-Onoda, fixed his eyes on the materials. “I feel the doctors’ resolution, though they were put in a horrible situation,” he said.