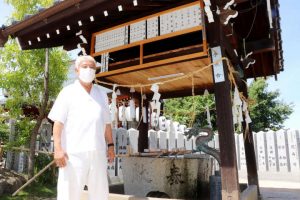 At a corner of a residential area on a small hill extending from Mt. Ogonzan (located in Hiroshima’s Minami Ward), in the district of Nishihonura-cho, stands Nihohime Shrine. Story has it that the shrine has protected the area for around 1,600 years. A special structure, built in 1916, protects a purification water basin, where worshippers cleanse their souls, from the elements.

On the structure’s pillar a plaque reads, “Let us all protect (this A-bombed building) together.” Kimimaro Watanabe, 66, is chief priest of the shrine. “The structure is important for remembering A-bomb victims and allows us to go back to that day,” said Mr. Watanabe.

The shrine is located about 3.6 kilometers from the hypocenter. The chief priest at that time was Mr. Watanabe’s grandfather, Takashi, a teacher at Hiroshima Prefectural Junior High School (now Kokutaiji High School) who died in 1961 at the age of 69. While worrying whether his shrine parishioners and students were safe, he soon headed for the city center, pulling a large two-wheeled cart, in an effort to assist in rescue efforts despite being struck in the back by glass fragments near the shrine. What he found was that many students from Hiroshima Prefectural Junior High School had died in the atomic bombing, and that his son had also suffered burns while working as a mobilized student for the war effort.

Immediately after the bombing, the shrine’s worship hall was turned into a relief station for A-bomb survivors. People who suffered burns as a result of the atomic bombing would likely have quenched their thirst at the water basin. It is said that about 20 members of families who had lost their homes continued to live on the shrine’s grounds until around October of that year, 1945.

The main shrine and the worship hall were once registered as A-bombed buildings by the Hiroshima City government. In 2007, however, the two buildings were incinerated by a fire of suspicious origins. At that time, Mr. Watanabe desperately sprayed pumped water and successfully prevented the fire from spreading to the water basin building. Two years ago, he put up the plaque with the words, “Let us all protect (this A-bombed building) together.” That act was born of his ardent desire to preserve, together with the local community, the only building that survived the fires that arose after the atomic bombing.