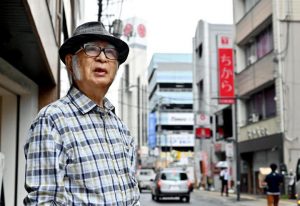 With home destroyed in fires, moved from one relative’s place to another
by Junji Akechi, Staff Writer

“People have given me generous support, because I lost everything including my house,” said Koshichi Tanaka, 87, a resident of Hiroshima’s Asakita Ward, as he stood in the area of Teppo-cho in the city’s Naka Ward. His family used to live in the area, which was known as Kaminagarekawa-cho at the time of the atomic bombing. His parents ran the Tanaka Little Bird Store there, about one kilometer from the hypocenter. The area was completely destroyed in the atomic bombing, which killed his parents, older brother, and older sister.

Before the atomic bombing, seven members of Mr. Tanaka’s family lived in that home—his father Seiichi, then 51, his mother Sakae, then 50, and five children. There were a total of 12 children in the family, but seven had already been conscripted into the military or killed in the war. The bird store supplied carrier pigeons to the military, and the family was well off as a result. “I used to play hide-and-seek in the Fukuya Department Store,” Mr. Tanaka said. But his life changed completely when he was evacuated to a safer area with other children.

In April 1945, many children between the third and sixth grades at national schools in Hiroshima were temporarily moved to northern parts of the prefecture, following the national government’s policy of preparing for air raids. According to Shinshu Hiroshima-shi Shi (in English, ‘New Hiroshima City History’), published in 1958, the number of such children was estimated to have been 8,365, as of May 1945. Mr. Tanaka, then 10 and a fifth-grade student at Noboricho National School, and his sister Yone, who was 8, left their parents’ place and stayed at a temple in the area of Mibu-cho (now part of Hiroshima’s Kitahiroshima-cho) with classmates.

On August 6, when Mr. Tanaka was weeding the playground, there was a flash of light and he saw a cloud rise into the sky in the direction of Hiroshima. On the following day, he saw injured people being carried into the town on trucks. “I didn’t know what had happened or what had become of my family. I didn’t know anything,” said Mr. Tanaka, recalling how he had been stricken with anxiety.

Around the end of the war, some of the children were taken home by their parents or relatives, but there was no sign of Mr. Tanaka’s parents. Because no one came to take him and his sister home even as the days wore on into September, the owner of a photography studio near the temple offered to take care of them if their parents failed to turn up. Eventually, their 17-year-old brother, Shozo, came to take them home about two weeks later. He had returned from a preparatory pilot training course of the Japanese Imperial Navy. Still grateful, Mr. Tanaka said, “I’ve never forgotten the kindness of the owner.”

After returning to Hiroshima with his brother, he found that the city had completely changed. Their home had been destroyed in the fires that arose at that time. After the atomic bombing, his parents took refuge with an acquaintance, but they fell ill from aftereffects of the atomic bombing and died in early September. His older brother, Genro, then 15 and a student at Sanyo Junior High School, and older sister, Fusako, then 13 and a student at Hiroshima Jogakuin Girls’ High School, also died. Only their youngest sister, Chikeko, then 7, survived the atomic bombing.

Shozo was only 17 and did not have any idea how to provide for his younger siblings. Two sisters were adopted by another family, and Shozo went looking for a job in Tokyo. Mr. Tanaka spent about two years moving from one relative’s place to another in and out of the prefecture. It was shortly after the end of the war, and even finding enough food was trying. Mr. Tanaka almost had given up on the idea of attending junior high school and was prepared to get a job. However, his brother, Shiro, then 24, got in touch with him after being demobilized from the military and advised him to go to school.

Supported by Shiro, Mr. Tanaka began attending junior high school in the second term of that school year. With help from the owner of his lodging and neighbors, he was able to also graduate from high school. He worked as a salesperson in the medical industry and married Mitsuko, now 83, in 1966. They have a daughter, and the family celebrated Mr. Tanaka’s 88th birthday this past spring.

Between 4,000 and 5,000 children are estimated to have become orphans because of the atomic bombing, but the entire picture is as yet unclear, with many people reluctant to share their experiences. Mr. Tanaka does not talk much about the hardships he experienced, only saying, “I was supported by the people around me and my brothers.” His wife said, “He must have suffered alone for quite some time, but he does not give that sense. I guess he was lucky, too.”

The year after the end of the war, Mitsuko’s family managed to return to Japan from what was known as Manchuria, in the northeastern part of China, and endured poverty after the war. “It’s surprising that both of us survived,” said Mr. Tanaka, looking back on the hardships he and his wife went through and the support they received from people around them.