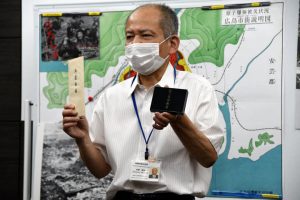 “We received this in place of her ashes.” Takanori Mizuno, 64, a resident of Asakita Ward in Hiroshima City, showed to an audience a medal in a small box that was presented for his maternal grandmother, Yoshiko, who had died in the atomic bombing at the age of 33. It was the only memento of Yoshiko left to Mr. Mizuno’s 89-year-old mother, Akiko. Mr. Mizuno, an “A-bomb Legacy Successor” certified by the Hiroshima City government, shared the story during a testimony held at Hiroshima Peace Memorial Museum, located in Hiroshima’s Naka Ward, earlier this year in mid-June.

Yoshiko, a squad leader of a local volunteer corps that had been organized by region, is believed to have experienced the atomic bombing while engaging in building demolition work for the creation of fire lanes at a location about one kilometer from the hypocenter. Her remains have never been found. Mr. Mizuno’s grandfather, Miyaichi, who had served as a major general of the former Imperial Japanese Army, received the medal for Yoshiko after applying to the national government.

About 10 years ago, when he found the medal in a deep corner of a chest of drawers, Akiko sternly told her son, “What a pity this serves as a substitute for my mother. I feel miserable.”

“Would you be satisfied with this?” Mr. Mizuno always asks the audience when he speaks. His mother’s pained appearance when he had discovered the medal made him decide to become an A-bomb Legacy Successor, a volunteer who takes on and communicates to members of the public the experiences of A-bomb survivors.

However, Mr. Mizuno touches on his family’s story for only about 10 minutes of his 45-minute talk because the city government has requested to this point in time that A-bomb Legacy Successors share mainly the experiences of non-family members. Conveying the A-bomb experiences of a third party is the point of this program.

Akiko was 13 years old when she was exposed to the atomic bombing at an area known as Kusatsu-honmachi, 4.1 kilometers from the hypocenter, on her way to school. She and her twin sister got on a streetcar that happened to be one car earlier than usual, resulting in their being some distance from the hypocenter. Seeing a pillar of fire rising up into the sky from her place near the driver’s seat, she jumped out of the streetcar. She waited for her family to pick her up at her school, Hiroshima Jissen Girls’ High School (now Hiroshima Shudo University Hiroshima Kyoso Junior & Senior High School, located in Nishi Ward). Mr. Mizuno introduces these stories of his mother only briefly during his talks.

On the other hand, listeners show intense interest in the fact that the speaker’s family actually experienced the atomic bombing, and many of the questions and impressions he is conveyed after his talks are related to his own family. “The story I’ve been told since I was a child might be communicated to the audience more readily because I speak with emotion,” Mr. Mizuno explained.

Then there was a turning point. The Hiroshima City government started a new program in fiscal 2022 called the “Family A-bomb Legacy Successors,” in which trained speakers take on and communicate the A-bomb experiences of their own families. Mr. Mizuno applied for the program, the training for which began earlier this year in July. When his work as a certified Family A-bomb Legacy Successor begins in fiscal 2024, he will be able to more fully focus on his mother’s story.

Akiko communicated her A-bomb experience to her son little by little since he was a child. After Mr. Mizuno became an A-bomb Legacy Successor, he actively asked his reluctant mother about her experiences, including the fact that she had stayed at her school for two days, filled with anxiety, until her older brother came to pick her up; that countless bodies were floating in the river, hair flickering like wakame seaweed; and that her mother, Yoshiko, never came home. Some other details he only found out recently.

Seven relatives, including Mr. Mizuno’s parents, experienced the atomic bombing directly, but his mother was the only one that shared her own experience and those of the other relatives. His aging mother, who had spoken of her account of the atomic bombing, now lives in a special nursing home for A-bomb survivors located in the city. He is considering how, as a Family A-bomb Legacy Successor, to fully convey his mother’s experience, which he had shared in the past only carefully and briefly. “The lives of families were changed by the absurdity of the atomic bombing. I want to continue conveying the A-bombing experiences of my relatives and other victims while keeping in mind their feelings, which they could not communicate even had they wanted to.”