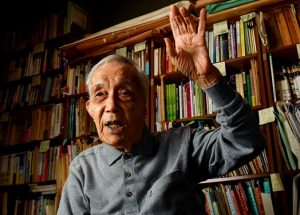 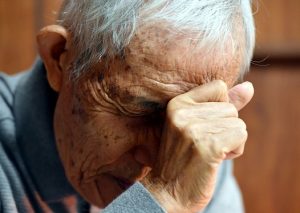 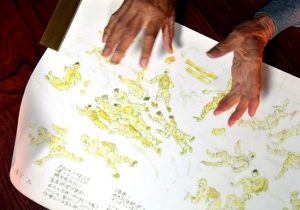 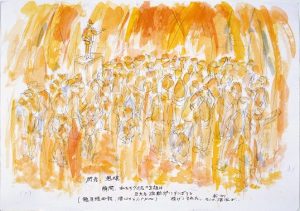 Single atomic bomb led to ‘apocalypse'
Hiromu Morishita was a third-year student at First Hiroshima Prefectural Junior High School (now Hiroshima Kokutaiji High School) when he was exposed to the flash from the atomic bombing in Hiroshima’s present-day Naka Ward, about 1.5 kilometers from the hypocenter, and hovered between life and death. His mother was killed in the bombing at their home. Mr. Morishita has devoted himself to peace education and communicating his A-bombing experience in Japan and overseas, while teaching traditional Japanese calligraphy at high schools and universities.

I want to tell Russian President Putin to visit Hiroshima and witness with his own eyes what resulted from the use of a single atomic bomb. I lost my beloved mother. My face, arms, and legs were burned. People have died from the health effects caused by radiation exposure. One such person was my aunt. Has humanity failed to learn from the experiences of Hiroshima and Nagasaki that such a situation must never be repeated?

I was 14 at the time. I had been mobilized to work on the dismantling of buildings for the creation of fire lanes in preparation for air raids. My mother had seen me off that morning as usual, and just after I had lined up with around 70 of my classmates at the worksite, the atomic bomb exploded. From that moment, my life was transformed into a hell, with the apocalypse spreading before me.

I witnessed many gruesome deaths. Looking out from a nearby hill, I saw that the entire city had been destroyed. Even smaller, tactical nuclear weapons should never be used, let alone be allowed to exist.

I survived, but the scars on my face continued to torment me. I landed a teaching job, married, and intended to ignore the scars. Still, on occasion, I suffered feelings of inferiority. It was not until I was in my 30s that I came to understand my mission in life was to speak about my A-bombing experience in my own interactions with children.

In 2004, I visited Ukraine and Russia as part of a peace mission. The rich farmlands and beautiful old cities I saw at that time have since been attacked and are being threatened with nuclear weapons. My heart aches when I think of the people there. Countries around the world seem to be more focused on saber-rattling than dialogue, leading to what I feel is a perilous situation. The chain of retaliation could lead to annihilation of the human race.

In both countries, young people listened attentively to my account and expressed their gratitude to me. I am sure that Russia has a conscience. I plead with them to change the country from within. (Interviewed by Michiko Tanaka, Senior Staff Writer)

Russia is intensifying its threats to use nuclear weapons. The country has declared its annexation of four Ukrainian regions and seems poised to use such weapons if those regions are ever attacked. Knowing the true inhumanity of the weapons, A-bomb survivors have been calling for a world free of nuclear weapons and war. Now is the time for Hiroshima voices to reverberate across the world.