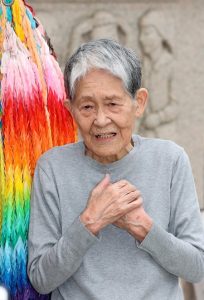 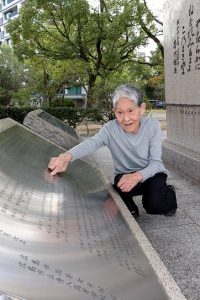 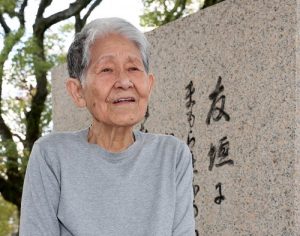 At the time of the atomic bombing, 541 first- and second-year students from Hiroshima Municipal Girls’ High School (now Funairi High School) were mobilized to engage in the work of creating fire lanes in the downtown area of the city. Exposed to the thermal rays from the atomic bombing on the south side of present-day Hiroshima Peace Memorial Park, all the students died. Ms. Yano escaped that fate because she was absent from school that day. Struggling with her own survivor’s guilt, she continues to communicate her A-bombing experience to the public.

“I’m here. I haven’t forgotten you.” That is what I always say to my deceased classmates from Hiroshima Municipal Girls’ High School whenever I visit their memorial cenotaph, which is situated alongside Peace Boulevard. I imagine how hot it must have been for them and how much pain they probably suffered at the time. Looking at the names of my old friends inscribed on the cenotaph, I recall each of their faces.

On that day, August 6, 1945, I had felt sick to my stomach and stayed home, which was located in the area of Ujina-cho (now part of Hiroshima’s Minami Ward). After sensing a sudden flash, I was hit by a blast. Like a solar eclipse, everything around me suddenly turned dark, and many wounded who had been carried to my family’s shrine died one after the other. For several days after the bombing, I helped cremate the bodies. I’ll never forget that smell.

The real suffering for me came after that. I learned that all of the first- and second-year students at my school had died while working on the day of the atomic bombing. Sometimes insults would be hurled my way, with some people derisively calling me “survivor” or “traitorous slacker.” When other students’ parents asked me if I knew of the whereabouts of their children, and I told them I had been absent that day, they would break down in tears right in front of me. I thought about committing suicide many times.

My health continued to suffer. Probably the result of my exposure to A-bomb radiation, purple spots appeared on my arms, and I suffered from severe anemia. Starting in my late 20s, my upper teeth all started falling out, and I ultimately had to wear full dentures. There was a time when I shunned other people by staying secluded at home.

I am frustrated and saddened by the current situation in which the potential exists for Russia’s use of nuclear weapons. I want to show photographs of Hiroshima taken in the aftermath of the atomic bombing to Russia President Vladimir Putin and tell him, “Please open your eyes.” Like my school friends, many children died without leaving behind any remains for surviving family members. Such a catastrophe should be avoided at all costs. Were nuclear weapons ever to be used again, both victims and survivors would have to go through hell.(Interviewed by Uzaemonnaotsuka Tokai, Staff Writer)