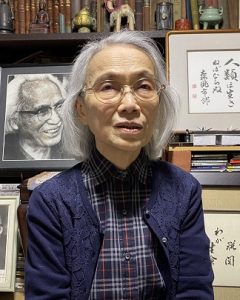 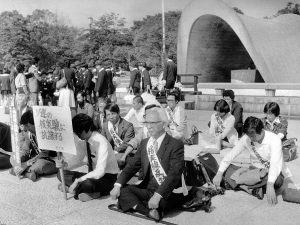 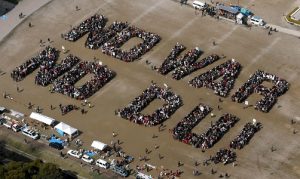 Haruko Moritaki is the second daughter of the late Ichiro Moritaki, an A-bomb survivor who led the movement to ban atomic and hydrogen bombs. Following in her father’s footsteps, Ms. Moritaki has dedicated her life to the anti-nuclear movement in Hiroshima. She once invited to Hiroshima young people from India and Pakistan, two nations that had dared to conduct nuclear weapons tests in 1998. In 2001, she established the citizens group the Hiroshima Alliance for Nuclear Weapons Abolition (HANWA), leading its activities while waging a personal battle against cancer.

By insinuating that it might well use nuclear weapons, Russia is trying to intimidate Ukraine with force. Russian President Vladimir Putin has pushed ahead with such threats for the sake of his imperialistic ambitions. No one can predict exactly what he’ll do next.

The world is now moving toward increased dependence on the idea of nuclear deterrence. I can only stand paralyzed by the current state of affairs in which nuclear weapons are interpreted merely as “strength.” My heart is filled with despair because the messages derived from the experiences of A-bomb survivors like my father — such as ‘humans cannot coexist with nuclear weapons’ and ‘we completely reject all uses of the atom, including nuclear energy’ — are not shared by others around the world.

Including Russia’s people, not much has been heard from members of the public opposed to the war and to the use of nuclear weapons. A situation in which people are oppressed as soon as they raise their voices in protest might have taken hold across the world.

Forty years ago, in 1982, when my father and other activists launched the Hiroshima Rally for Peace, in concert with the anti-nuclear movement taking place in Europe at that time, a crowd of nearly 200,000 passionate people gathered together in Hiroshima. Such individuals still possessed vivid memories of the war and shared a strong sense of anger and danger with respect to the fact that their lives could be taken mercilessly by nuclear weapons.

Before the Iraq War broke out in 2003, citizens throughout the world staged large-scale demonstrations in protest against the conflict. In Hiroshima, 6,000 people came together in the city’s Central Park in their ardent desire to stop the war. Not only those who engaged in the anti-war protests but others, young and old alike, united with each other to say “No” to the war as individual members of the public.

Again, in a similar way, we all should be driven to a greater degree by anger. In Ukraine, civilians are being killed daily, with some forced to flee from their homes. Russia currently occupies a nuclear power plant in Ukraine, and its potential for use of nuclear weapons is of grave concern. I am livid about that situation and feel so frustrated because, with my illness, I can’t do what I want to do.

We should not suppress the nonnegotiable hopes of Hiroshima’s people. We must combine our feelings of anger to create a force strong enough to end this war and prevent Russia from using nuclear weapons. (Interviewed by Hiromi Morita, Staff Writer)