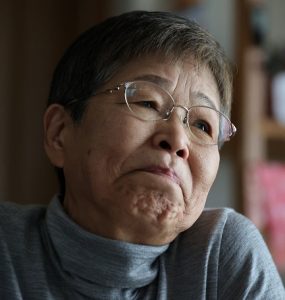 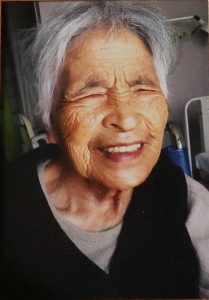 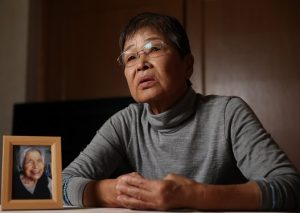 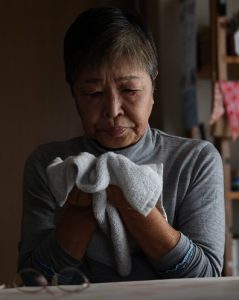 Still concerned about her health
In 2014, Mitsue Terada began to share with the public her experience as an in-utero exposed survivor of the atomic bombing. She continues to call out the cruelty of war and the atomic bombings, based on the disappointment and anguish experienced by her mother, Tomeko Fukuchi, who was blinded by glass shards in both eyes from the A-bomb blast and died in 2013 at the age of 94.

When my mother experienced the atomic bombing near Hiroshima Station, she was five months pregnant with me. As a result, I am called an in-utero survivor. It’s true; I have been an A-bomb survivor since the time I was born. Nuclear weapons are horrifying. I feel the need to tell people around the world that radiation can damage DNA and even affect fetuses.

If exposed to high levels of radiation in the early stages of pregnancy, a child might develop “A-bomb microcephaly,” a condition marked by a small head size and the possibility of intellectual and physical disabilities. Some in-utero survivors have experienced cancer and undergone multiple abdominal surgeries.

That’s not all. Their children and grandchildren could also suffer health problems. A-bomb survivors have no escape from such worries. That is because the genetic effects of radiation exposure are still not fully understood. Some in-utero survivors were forced by their families to undergo an abortion when they became pregnant. When giving birth to my own child, I also was frightened. I remember asking the nurse, “Does my baby have all its fingers?”

I myself have managed to live without major issue. That said, though, I feel compelled to raise my voice as an in-utero survivor. I began to think in those terms after witnessing my mother’s life.

My mother lost her eyesight at the age of 26. Her life thereafter was hard. She described the difficulties she had breastfeeding me as an infant. She also had trouble cooking rice on our wood-burning stove, sometimes singeing her bangs as she cooked. When she was 30, she learned the Braille alphabet and the techniques of massage and opened an osteopathic clinic so she could work for our family. I want to ask everyone to give thought to the disappointment and suffering of my mother, who never knew my face.

The atomic bombings claimed and ruined many lives. Russia uses nuclear weapons as a tool of intimidation. That is unforgivable. If nuclear weapons were to be used now, the effects would persist over a long time. I want people around the world to more fully understand that cruelty. (Interviewed by Uzaemonnaotsuka Tokai, Senior Staff Writer)