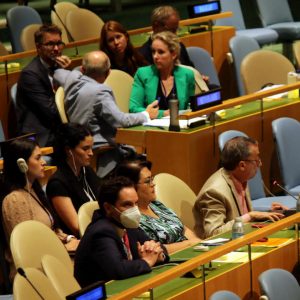 In mid-August, a diplomatic source grumbled about the confrontation among participating nations over gender issues during the Non-Proliferation Treaty (NPT) Review Conference held at the United Nations headquarters in New York City. “It’s a clash of civilizations.” The comment describes the current state of affairs in which the heretofore unseen assertion is growing of the importance of diverse gender perspectives in international politics and diplomatic relations, areas that traditionally have been led by men, amid an equally entrenched reaction against that trend.

“The process of nuclear disarmament must be carried out with an eye to the diversity, equity, and inclusion of all women, minorities and diverse populations.” That language was contained in a joint statement delivered forcefully at the general debate on August 4, held shortly after the start of the review conference, by a Canadian delegate who called for the need to include “gender perspectives.”

Western nations and Japan in agreement

The statement pointed out that various factors, such as gender and economic status, need to be taken into account when the risks of, and measures taken against, nuclear arms are considered, because many civilians would fall victim, as was seen in the atomic bombings of Hiroshima and Nagasaki, if the weapons were ever to be used again. “Improving gender diversity and mainstreaming gender perspectives into nuclear policymaking will strengthen the Treaty process,” emphasized the statement.

With agreement obtained from 67 participants, mainly Western nations but also Japan and other Asian and Central and South American countries, the issue of “gender perspectives” was included in the rough draft final document drawn up by the First Committee (Disarmament and International Security) on August 12.

Nevertheless, on August 16, the situation had completely changed when that language was deleted from a revised draft. In deliberations on August 17, criticism erupted from among the delegates about the removal of the language, describing it as going against the times and lacking appropriate recognition of gender diversity. The chair was forced to explain the reason for the removal when the Netherlands delegation questioned whether referencing gender was considered taboo. On the other hand, Iraq, which was in favor of deleting the language from the draft, claimed the conference was not the place to talk about views on gender or diversity, with some countries coming to the defense of the Iraqi statement. With that, the debate on gender grew more complicated.

According to multiple diplomatic sources, the exchange of opinions along those lines continued into the closed meetings in the final stage of the conference. With a religious element involved, the Islamic world and some European countries are believed to have resisted any mention of gender because the word also implied the concept of sexual minorities.

In the end, expressions including “the Conference noted States Parties’ call for the further integration of gender perspective in all aspects related to implementation of the Treaty” were incorporated into the draft final document. That was the result of numerous efforts by Ireland, Canada, and other countries passionate about the issue to lobby other states parties that had submitted joint working papers and held related events at the UN headquarters.

A study published by the United Nations Institute for Disarmament Research showed that less than 20 percent of government delegations from participating countries and regions at the last NPT Review Conference in 2015 were headed by women. At the conference this time, the chair posts of two of three major committees were held by women, but most participants considered the number of female delegates to still be small. Japan’s delegation also stood out for being made up mostly of men.

Ultimately, a draft final document was not adopted. However, an Irish delegate looked ahead by stating at the closing meeting on August 26, “This is the first full Review Cycle to consider gender issues from the start. We must build on the work done here to ensure the inclusion of gender perspectives through the next Review Conference.”

The NPT regime, unable to make progress on nuclear disarmament because the five nuclear weapons states are at the helm, lacks recognition of diversity and in that way reflects broader society, which has long remained unchanged. How can perspectives on gender positively affect progress toward a “world without nuclear weapons?” The next set of developments following this conference’s “clash of civilizations” is certain to be important.