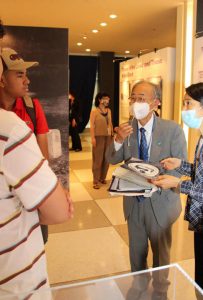 The day after August 26, when the NPT Review Conference failed to reach an agreement following four weeks of deliberations, the weary Argentinian Conference President Gustavo Zlauvinen paused to respond to questions from the Chugoku Shimbun. Asked whether he had a message for Hiroshima, the A-bombed city that seeks the elimination of nuclear weapons, Mr. Zlauvinen looked straight at the writer. He responded by expressing his hope that the efforts of conference participants would be rewarded with the realization of a society in which humanity never suffers the same experience.

The conference was held during the month of August, unusual timing given that the gathering had been pushed back due to the coronavirus pandemic from the originally scheduled date of spring 2020. During the conference period, starting on August 1, the A-bombing anniversaries of Hiroshima and Nagasaki were commemorated, and delegations from individual nations and regions referred in their talks to the two cities, in an expression of solidarity.

Aging A-bomb survivors, including Jiro Hamasumi, 76, a resident of Tokyo who experienced the atomic bombing of Hiroshima in his mother’s womb, traveled to New York and repeatedly told of their A-bombing experiences at the meeting venue. The Japan Confederation of A- and H-Bomb Sufferers Organizations (Nihon Hidankyo) held its customary A-bombing exhibit during the conference period at the UN headquarters. Through the photo panels depicting children killed in the bombing and city areas turned into ruins, among other images, the tragedy that took place 77 years ago on August 6 seemed to make a deep impression on visitors.

The NPT Review Conference draft final document included such wording as “States parties affirm that awareness of the catastrophic humanitarian consequences of the use of nuclear weapons ought to underpin our approaches and efforts towards nuclear disarmament,” as if in response to the calls from the A-bombed cities. That outcome was possible because nations affected by the nuclear testing and non-nuclear nations that have led in the fight for nuclear abolition collaborated to highlight the inhumanity of nuclear weapons in their joint statement and working documents, as well as in their comments during deliberations.

Meanwhile, some nuclear weapons nations continued to exhibit their reluctance to describe the inhumanity of the weapons in the draft document. Despite the hope of A-bomb survivors to eliminate nuclear weapons in their lifetimes, the draft final document failed to contain numerical targets or timelines related to nuclear disarmament efforts. In the end, with Russia’s opposition to the draft and the backdrop of that country’s invasion of Ukraine and its threats to use nuclear weapons, the review conference suffered a breakdown for the second time a row. That no concrete outcome relating to “a world without nuclear weapons” resulted from the conference was a reality that announced to people in the A-bombed cities that they are in for a challenging time.

Barack Obama was the first sitting U.S. president to visit Hiroshima, in 2016, followed by Pope Francis, in 2019. Repeated visits to the city by leaders with worldwide influence inflated the expectations of Hiroshima’s people with regard to the possibility of achieving a world free of nuclear weapons. Now, however, the world is being pushed in the direction of expanding nuclear arsenals. The review conference’s draft final document revealed profound fear. “The Conference expresses deep concern that the threat of nuclear weapons use today is higher than at any time since the heights of the Cold War,” was included in the draft’s language.

In May of next year, the summit meeting of the G7 (Group of Seven industrialized nations) is scheduled to be held in Hiroshima City. National leaders, including those from the three nuclear nations of the U.S., the U.K., and France, will likely join together on a visit to Hiroshima Peace Memorial Park, located in the city’s centrally located Naka Ward. Because the summit represents a good opportunity to make an appeal to the international community for the elimination of nuclear weapons, Beatrice Fihn, executive director of the NGO International Campaign to Abolish Nuclear Weapons (ICAN), an organization that advocates for the TPNW, encouraged the government of the A-bombed nation of Japan to realize there are still challenges the nation needs to address.

Hiroshima now must play the role of pushing the government forward. The failed NPT Review Conference strongly reminded everyone of the need to broadly communicate the voices of A-bomb survivors and their wish that no one else should ever experience what they did, as well as to tirelessly call for achievement of a world without nuclear weapons and war.