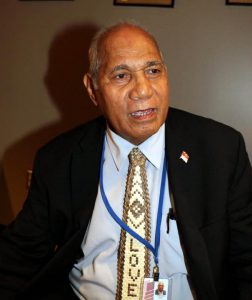 On August 22, Teburoro Tito, ambassador to the United Nations of the Pacific island nation of Kiribati, addressed the plenary session of the Nuclear Non-Proliferation Treaty (NPT) Review Conference, held at the UN headquarters in New York City. “It’s a waste of time. I refuse to sit here for days on end and continue discussions that would benefit weapons manufacturers.” UN Ambassador Tito’s cynical criticism was aimed at nuclear weapons states that sit idly by on the issue of nuclear disarmament.

Kiribati’s residents protest about the health and environmental damages they have incurred from nuclear tests conducted by the United States and the United Kingdom. The island nation, with a population of roughly 120,000 people, about one-tenth that of Hiroshima City, and an area of 730 square kilometers, has a gross domestic product among the lowest in the world. Mr. Tito, the country’s former president, who acknowledges the diminutive nature of his country, stood out throughout the conference for his stridency and lack of concern for the nuclear powers present at the conference in calling for the abolition of nuclear weapons.

Neither the five nuclear weapons states nor nations that rely on nuclear deterrence have taken the lead in discussions aiming at achieving a world without nuclear weapons. Austria and Costa Rica were instrumental in establishing the Treaty on the Prohibition of Nuclear Weapons (TPNW) following the failure of the last NPT Review Conference, held in 2015. Many of the 66 countries and regions that have already ratified the TPNW are smaller nations in Latin America, Asia, and Africa.

During the plenary session at this year’s conference, government delegations from countries supporting the TPNW met frequently and communicated with each other both inside and outside the conference hall. Other related events were held at the UN headquarters during the timeframe of the conference. Through discussions with specialists and representatives of non-governmental agencies from a variety of countries, the delegations enhanced their solidarity by together reconfirming the inhumane nature of nuclear weapons and the necessity of their abolition.

“The catastrophic consequences of nuclear weapons affect each and every citizen in our interconnected world. These consequences have deep implications for human survival; for our environment; for socioeconomic development; for our economies; and for the health of future generations.” The joint statement on the inhumanity of nuclear weapons read by a Costa Rican representative on August 22 was replete with the sense of crisis that small countries are feeling. After the statement, government representatives from countries supporting the abolition of nuclear weapons beamed with satisfaction. Members of the NGO International Campaign to Abolish Nuclear Weapons (ICAN) expressed their approval through repeated messages on the social media platform Twitter.

If a nuclear conflict were to be initiated by the nuclear superpowers, smaller neighboring countries, not only the combatant nations, would be drawn into the war and suffer damage. To eliminate that potential scenario, smaller countries have been driven by a sense of mission to abolish nuclear weapons.

Nevertheless, it is a fact that trends in international society are determined for the most part by major countries. In the final stage of the NPT Review Conference, small groups held frequent discussions behind the scenes, carefully examining the draft final document. Each time an amendment was made, the language involving nuclear disarmament was weakened as if to accommodate the wishes of nuclear weapons states. Eventually, the draft document only contained factual information, such as that the TPNW had entered into force. Also deleted was the wording making reference to the “Vienna Declaration” and the “Vienna Action Plan,” which were adopted at the First Meeting of States Parties to the TPNW in June, as well as the language highlighting the complementary relationship between the TPNW and the NPT.

In the latter half of the conference time period, some delegates from smaller countries complained of how the conference appeared to take one step forward only to retreat two steps back and how it made little sense to stick solely with the NPT regime.

In the plenary session on August 26, the final day of the conference, Alexander Kmentt, director of disarmament, arms control and nonproliferation at the Austrian Ministry of Foreign Affairs, asserted that the NPT has been of little use in advancing nuclear disarmament and emphasized the stance of leading non-nuclear weapons states toward a world without nuclear weapons through both talk and action. The NPT Review Conference ended in failure for the second time in a row, with the United States opposing the final document at the last conference and Russia opposing it this time. The more the nuclear superpowers try to boost their own egos, the more difficult maintaining the NPT regime will be.