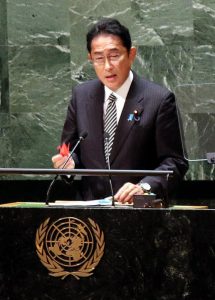 Two-and-a-half hours after the Nuclear Non-Proliferation Treaty (NPT) Review Conference concluded at the United Nations headquarters in New York City without reaching an agreement on a final document, Japan’s Prime Minister Fumio Kishida, who had remained at the prime minister’s residence in Tokyo while recovering from COVID-19, spoke to reporters via monitor on August 27. Mr. Kishida said, “Maintaining and strengthening the NPT regime is the one and only realistic path toward nuclear disarmament.” Despite a second consecutive breakdown, following a similar failure at the 2015 NPT Review Conference, Mr. Kishida reiterated his contention that the NPT remains the most important framework for achieving a “world without nuclear weapons.”

Mr. Kishida was the first prime minister of Japan to attend an NPT Review Conference, held seven years since the last conference. In his speech on the first day of the gathering, he announced the Hiroshima Action Plan, a five-item framework that includes continuation of the “non-use of nuclear weapons,” a policy that has been in place since the atomic bombings of Hiroshima and Nagasaki, as well as enhancement of the transparency of the nuclear capabilities of each nation.

Mr. Kishida returned to Japan immediately after his presentation. During the four weeks of full-scale negotiations after that, stern eyes were cast on the role that the A-bombed country of Japan was playing. With regard in particular to “serving as a bridge” between nuclear and non-nuclear weapons states, an aim Mr. Kishida has repeated since his term as foreign minister of Japan, some have vocalized their doubts about what concrete actions Japan will take to that end.

“Japan’s stance toward building bridges was very passive,” said Hideo Asano, 25, a graduate student at the Middlebury Institute of International Studies in the United States and a member of the Japan NGO Network for Nuclear Weapons Abolition (based in Tokyo) who attended the conference as an observer, at an online press conference held on August 29. He added it was not Japan but rather Austria, another non-nuclear state, that had been involved in behind-the-scenes negotiations with nuclear weapons states. He expressed his opinion that there are limits to the Japanese government’s peace diplomacy, because it is reliant on the principle of nuclear deterrence under the U.S. nuclear umbrella.

In contrast, the Japanese government emphasized its achievements by highlighting how the views and statements Japan had advocated at the conference “gained support and appreciation from many countries,” according to Japan Foreign Minister Yoshimasa Hayashi. Within the Hiroshima Action Plan that the prime minister proposed, the significance of the continuation of the non-use of nuclear weapons and maintenance of the decline in global nuclear stockpiles were items incorporated into the conference’s draft final document. However, the government’s basic stance remained unchanged, with Japan failing to express approval for a “no first use” declaration that would limit the use of nuclear weapons.

Questions regarding the national government’s commitment to the conference were also expressed. Negotiations with other participating countries had been entrusted to Minoru Terada, a second-generation A-bomb survivor who is in charge of nuclear disarmament and non-proliferation issues as a special assistant to Prime Minister Kishida’s Cabinet and a representative of Hiroshima Prefecture’s District No. 5. However, with Japan’s Cabinet reshuffle on August 10, Mr. Terada was appointed minister of internal affairs, just as conference negotiations were entering a crucial stage.

The appointment of Mr. Terada, a member of Mr. Kishida’s LDP faction, known as Kochikai, and who has been elected six times, was considered by some to be a “factional appointment based on seniority.” Shunsuke Takei, Japan’s state minister for foreign affairs, was hurriedly dispatched to serve as Mr. Terada’s replacement. Even experienced Diet members close to the prime minister, however, criticized Mr. Kishida’s decision. “Mr. Terada should have continued to manage the negotiations during the session. The prime minister’s commitment is not readily apparent,” said one.

Prior to the meeting of the International Group of Eminent Persons and the summit meeting of the G7 (attended by the Group of Seven industrialized nations), gatherings to be held in Hiroshima this year in November and next year in May, respectively, how the prime minister will move toward his vision of a world without nuclear weapons will be of great interest. Based on the reality that nothing has been achieved for more than 50 years since the NPT took effect in 1970, Masako Wada, 78, assistant secretary general of the Japan Confederation of A- and H-Bomb Sufferers Organizations (Nihon Hidankyo), made an appeal at the NPT Review Conference that the abolition of nuclear weapons is humanity’s “responsibility,” concluding that “the NPT regime has become dysfunctional.”

A-bomb survivors have placed their hopes in the TPNW. The treaty entered into force in January last year, 2021, and the number of countries and regions ratifying the treaty has now reached 66. Ms. Wada says that only an international law that bans the threat of use of nuclear weapons can be used to condemn the behavior of Russia. She stresses that her organization and other groups will continue to call on the Japanese government to join the TPNW. How will the prime minister respond to the attitude of A-bomb survivors, who are despondent but have started to once again move ahead? The citizens of the A-bombed cities are keeping a close eye on his actions.