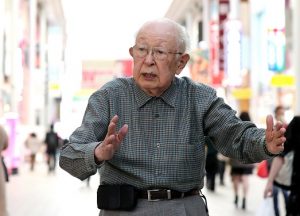 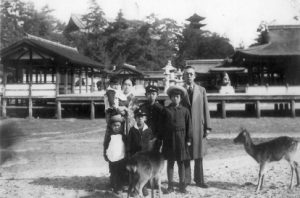 Do not destroy children’s futures
When Hiroshi Okumoto was 15 and a third-year student at Shudo Junior High School in Hiroshima City, his parents and four siblings were killed in the atomic bombing. He and his grandmother survived the postwar years together, opening a menswear shop on present-day Hondori shopping street, located in Hiroshima’s Naka Ward, in 1962. The location of the shop was where their home once stood. Although the shop is closed now, Mr. Okumoto still lives in the shopping area with the memories of his family.

My parents ran a hardware store at their home, about 420 meters from the hypocenter. The street, lined with busy shops, was a playground for me. There, I had fun watching picture-story shows and playing card games with my friends. The entire area, though, was turned into a sea of flames by the atomic bombing.

I now see news of private homes and places where parents and children should be enjoying their lives, not military facilities, being attacked in Russia’s invasion of Ukraine. The news has brought back feelings of my standing paralyzed amid the ruins of my house 77 years ago, feeling the heat of the fire smoldering beneath the ashes. I am filled with rage at the reality that a similar situation is being repeated today.

On that day, August 6, 1945, I was mobilized as a student worker at a lumberyard in the area of Niho-machi (now part of Hiroshima’s Minami Ward), about 4.1 kilometers from the hypocenter. My parents and youngest sister were at home, but ultimately I was only able to reunite with my mother. She had only suffered some cuts in the bombing but later lost her appetite and experienced diarrhea over an extended period. On the morning of August 14, I was massaging her legs when she said, “That’s enough” and breathed her last.

On August 15, I discovered where my father took refuge after the bombing, but he had already been cremated. I found the small bones of my sister among the ruins of our house. I was unable to find the remains of my three other siblings, who had been at school or mobilized to tear down buildings to create firebreaks in the city. Adults around me cried with frustration at the news of the war’s end, but I was simply lonely. I believe there are children in Ukraine who also are feeling profound loneliness. My heart aches for them.

I lost my parents at the age of 15 and, without being able to afford the shedding of any tears, just barely managed to survive. Based on that experience, I want to tell politicians of the world to not repeat the destruction of children’s futures. (Interviewed by Yumie Kubo, Staff Writer)