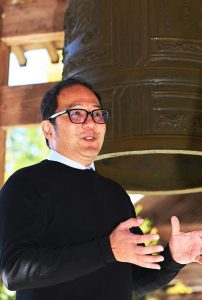 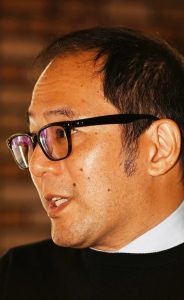 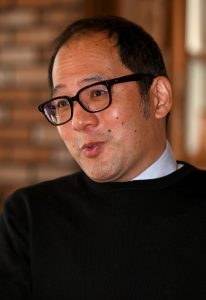 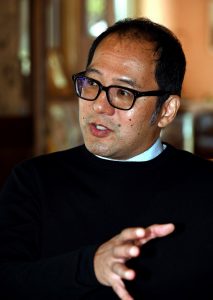 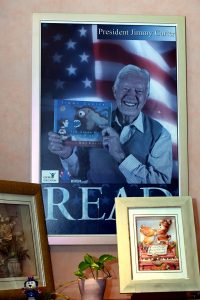 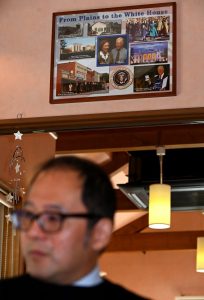 Our actions will bear fruit in the form of peace
Warren Tang worked with local citizens in the town of Konu-cho, located in Hiroshima Prefecture’s Miyoshi City, in a project involving construction of a bell tower for the “Peace Bell.” The bell was originally supplied by Shoganji Temple in Konu-cho to serve as a source of metal for munitions during World War II and ultimately made its way to the Carter Center, in Atlanta, Georgia, which is connected to former U.S. President Jimmy Carter, 90. In October, Mr. Tang participated in a ceremony at the Carter Center commemorating completion of the bell tower. Originally from Australia with experience living in Canada and Hong Kong, he currently teaches English at Fukuyama University in Fukuyama City.

Despite living in Konu-cho, a quiet and peaceful town, I cannot ignore the war and other events taking place in Ukraine. I simply cannot accept Russian President Vladimir Putin’s inhumane words and actions.

My father was born in Malaysia, and my mother is from Hong Kong. In Asia, wars and civil strife repeated themselves from the colonial period through the war. My grandmother and other relatives conveyed to me their harsh experiences of having fled their home country to avoid the horrors of war. I’ll also pass on such stories to my own children and grandchildren. That’s the same way A-bomb survivors have passed on their own experiences to younger generations.

“Hiroshima” has significance beyond its name. Since I was a child, I have heard that nuclear weapons would kill all living things. That’s why I offer a silent prayer at 8:15 a.m. every year on August 6 and contemplate the lives of A-bomb victims. I keep in my heart the horror of nuclear weapons and nurture my wish for world peace.

One of the concrete actions I took to achieve that wish was to engage in the project involving construction of the bell tower. More than 10 years ago, I had a chance to see the Peace Bell, displayed on a pedestal in the Carter Center. I thought that by listening to the sounds of the bell people would remember the teachings of the Buddha and their gratitude for everyday life. The sounds of the bell will lead to friendship between Japan and the United States. My wish was to make it possible for that bell to ring. With that hope in mind, I wrote a letter to former U.S. President Jimmy Carter, which marked the beginning of the bell tower project.

As the project continued, people across national boundaries were connected with each other. When I heard the sound of the bell emanating from the new bell tower and witnessed attendees from Japan and the U.S., two nations that were former enemy combatants in the war, share the joy of the occasion, I was moved because my wish had been shared among so many people.

We now have become accustomed to the tragedy unfolding in Ukraine. We should never become complacent about war. In each passing moment, there are people who are suffering. Each of us can do something about that situation. The seeds of our acts are certain to grow into seedlings, become trees, and bear the fruits of peace. (Interviewed by Norio Chiba)