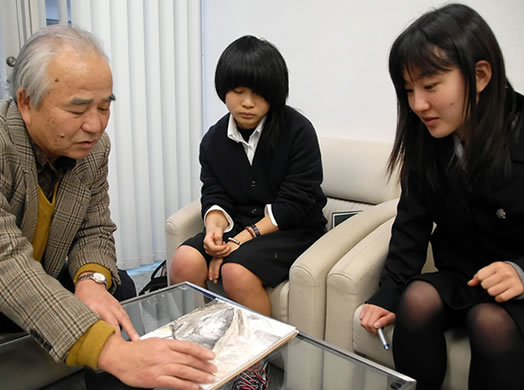 High school students in Hiroshima are depicting the dreadful state of the atomic bombing from the perspective of hibakusha. The aim of the project is to pass on the memories of hibakusha to the younger generation by interviewing these survivors in person and then expressing the lessons learned through art. The pictures, to be completed by the end of February 2008, will then be displayed when hibakusha present testimonies of their experiences.

Responding to a call by Hiroshima Peace Memorial Museum, sixteen students in a course on Creative Expression at Motomachi High School in Hiroshima are taking part in the project. Since October 2007, they have been engaged in interviewing eight hibakusha and making preliminary sketches.

Saki Shibata, 16, is creating an oil painting based on the account of Takashi Teramoto, 73, who was at home, one kilometer from the hypocenter when the bomb exploded. At a meeting at Peace Memorial Museum on December 22, Ms. Shibata brought a rough sketch depicting a woman trapped in a house that has collapsed to show Mr. Teramoto. In response to Mr. Teramoto’s instruction, Ms. Shibata carefully revised her version of the scene. “I want my painting to be close to the image of Mr. Teramoto’s memory,” she said. “I hope it can convey the reality of that time.” For his part, Mr. Teramoto would like Ms. Shibata to imbue the painting with her own feelings for peace and carry that passion into the world “to help prevent such a tragedy from ever taking place again.”

The completed pictures will be donated to the Hiroshima Peace Culture Foundation which administers Hiroshima Peace Memorial Museum. The possibility of holding an exhibition of the artwork is also being considered.
ツイート
Return