Song for peace from Hiroshima grows to over 1100 verses 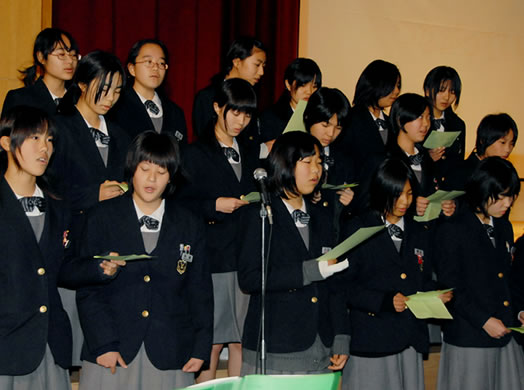 A song called “Our Wish,” with lyrics submitted by people from around the world that share hopes for peace, has now grown to over 1100 verses.

The original four verses were written in 2002 as part of a project in peace education at a junior high school in Hiroshima. An NPO in Kobe then took up the idea of soliciting additional verses from the international community. As of December 22, 2007, a total of 1,170 verses have been created from 25 countries, including Japan, the United States, Iran, and Kenya.

Each verse of the song takes its own approach to peace. One verse, the 682nd, includes the idea, “If people held musical instruments instead of weapons, the minds of all would be healed and be at peace.”

The momentum of “Our Wish” moves on with no end in sight. Inspired by this rising support for the song, Tatsuya Ishii, 48, a Japanese musician and artist, created another new song which junior high school students in Hiroshima then sang. Mr. Ishii began composing this song at the end of 2006 when he was interviewed by junior reporters from Hiroshima Seeds, a peace newspaper written by teens and published by the Chugoku Shimbun. He released his new song, “Faraway Event” (Toi Dekigoto), in April 2007.

At Ujina Junior High School, where Motoharu Yokoyama, 48, conceived the “Our Wish” project, a chorus of 36 students sang “Faraway Event” at a school event held on December 21, 2007. Students recalled their experience of performing the song for Mr. Ishii when he visited the school in August 2007.

Rika Aso, 13, a second-year student, said with pride, “We were able to share our wish for peace with Mr. Ishii through his song.” The students plan to send a videotape of their performance in December to Mr. Ishii.

Mr. Yokoyama is delighted with the growth of his song and summed up by saying, “It is important to express thoughts of peace and everyone must find their own way of conveying these feelings.”
ツイート
Return